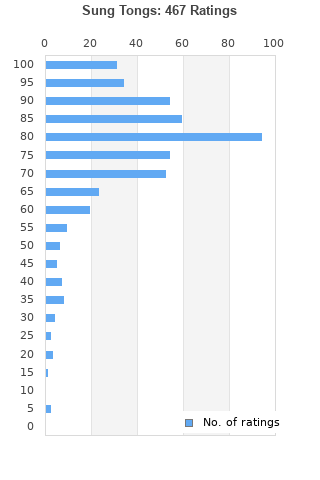 Sung Tongs is ranked 4th best out of 28 albums by Animal Collective on BestEverAlbums.com.

The best album by Animal Collective is Merriweather Post Pavilion which is ranked number 125 in the list of all-time albums with a total rank score of 13,175. 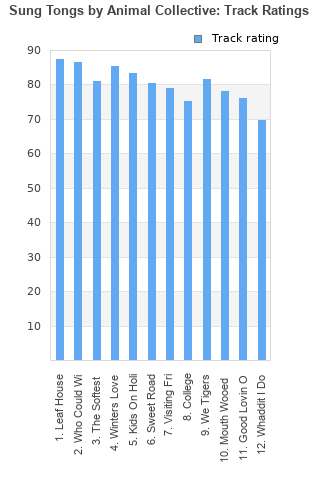 Rating metrics: Outliers can be removed when calculating a mean average to dampen the effects of ratings outside the normal distribution. This figure is provided as the trimmed mean. A high standard deviation can be legitimate, but can sometimes indicate 'gaming' is occurring. Consider a simplified example* of an item receiving ratings of 100, 50, & 0. The mean average rating would be 50. However, ratings of 55, 50 & 45 could also result in the same average. The second average might be more trusted because there is more consensus around a particular rating (a lower deviation).
(*In practice, some albums can have several thousand ratings)
This album is rated in the top 3% of all albums on BestEverAlbums.com. This album has a Bayesian average rating of 78.0/100, a mean average of 77.0/100, and a trimmed mean (excluding outliers) of 78.1/100. The standard deviation for this album is 16.5.

A slower release from Animal Collective that has some bright moments but it also has some of their weaker tracks I have heard on one of their albums. The first two tracks really throw you in at the deep end with them being the two weirdest on the whole record but they are also the best. Once you have listened to this album around 3 or 4 times those songs will be stuck in your head as they are that infectious. They are classic AC and these songs alone bring me back to this record regularly. You then have some more brilliant songs scattered across the release such as Winters Love, Kids On Holiday and Visiting Friends. However, the record can feel a little too slow at times and like it could do with an injection of life similar to what we get on MPP. A few songs don't really hit with me as well such as Whaddit I Done which is probably the weakest on the whole. Despite this, we are listening to AC so it is extremely difficult to be bored as they are so experimental that we have loads to explore still. Overall, this isn't my favourite of their releases but it is a lot of fun and we get a lot of excellence scattered in the album.

Definitely not for me, I guess it requires a specific taste to be appreciated.

I will never forget the way it felt when I first heard Leaf House and Who Could Win A Rabbit. Magical.

A great freak folk record put out by Animal Collective

Even though I perceive Feels, SJ & MPP as their pinnacle, Sung Tongs will always be my favourite. It's so mesmerizing, it's like the perfect soundtrack to an indie film based in the words. The vocals are otherworldly.

one of Anco's best. The standout here are clearly the childish chants of Who Could Win a Rabbit, the gorgeous Winters Love, the charming Leaf House and the impressive, 12-minute psychedelic drones of Visiting Friends. Whaddit I Done is one of their worst songs.

There's a certain beauty about this album. It's so different from their other albums that I've listened to: MMP, Feels, and Strawberry Jam. I was expecting some more crazy electronic neo-psychedelia, but the strange fluid acoustic guitars make it feel like if Neutral Milk Hotel just completely melted and lost all of their stability and became this beautiful sloppy mess. However, all of that being said, it just doesn't feel memorable at all, and that's generally something that turns me onto an album. Maybe some more listens will change my mind, but at the moment I respect Sung Tongs as a beautiful album that unfortunately isn't for me.

Listen to the guttural singing that's bubbling up from the earth...it's...it's some weird punk-ass shit that's what. One of the best records ever that sounds like it was recorded in one afternoon while high in a basement.

A masterpiece of highly accesible neo-psychedelia. From the layered vocals on "Who could win a Rabbit?", to the rapid percussion on "Winters Love", or the gradual crescendo on "Visiting Friends": this album proves consistantly to be sheerly fantastic. Even some of the more short "filler" songs such as "College" holds a haunting message to youth of past and present. This album is in my subjective opinion one of the greatest works of music of all time, and I guarantee you its at least worth a listen—or hundreds, in my case.

Really nice contrast to Merriweather, which is great. It's soothing and almost kind of hypnotic in places. Chilled out and a pleasure to listen to.

Your feedback for Sung Tongs