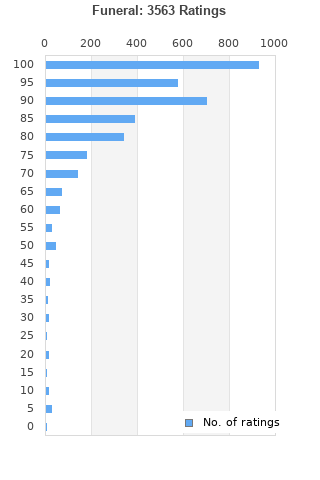 Funeral is ranked as the best album by Arcade Fire. 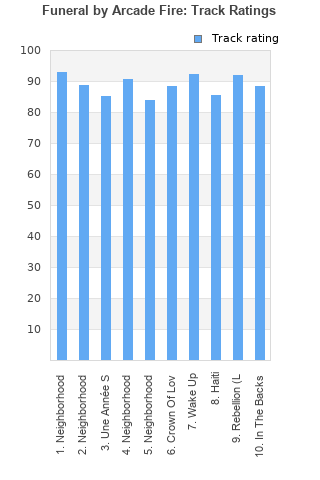 Rating metrics: Outliers can be removed when calculating a mean average to dampen the effects of ratings outside the normal distribution. This figure is provided as the trimmed mean. A high standard deviation can be legitimate, but can sometimes indicate 'gaming' is occurring. Consider a simplified example* of an item receiving ratings of 100, 50, & 0. The mean average rating would be 50. However, ratings of 55, 50 & 45 could also result in the same average. The second average might be more trusted because there is more consensus around a particular rating (a lower deviation).
(*In practice, some albums can have several thousand ratings)
This album is rated in the top 1% of all albums on BestEverAlbums.com. This album has a Bayesian average rating of 88.1/100, a mean average of 86.4/100, and a trimmed mean (excluding outliers) of 88.2/100. The standard deviation for this album is 16.4.

Brilliant artful alternative music that isn't pretentious about it. It is elegant and understated and leaves a long lasting impression on you.

Pleasantly surprised with this one. Way, way better than I was expecting based on previous albums I'd heard from them. This has a great feel and flow right throughout. Best album from them in my opinion.

I am loving the renaissance this albums is getting since the new Black Country, New Road album came out and people have been comparing it this one and realising again what a great album this is. Its reputation has gone a bit down recently mostly because of two factor - this sound has been emulated by lesser bands so much, and Arcade Fire's last album has been lackluster. Glad people are forgetting that and returning to this album which is a stone cold masterpiece.
Sids B is one of the strongest album sides ever, 4 out of 5 songs are among the decade's best songs.

It possible takes time and several listens for a boomer to understand the real magnificence of this album,
A rerun may better the score. This band has great forerunners and influencers in sound and tone(Velvet Underground, Iggy and David Bowie)

I think these guys are insanely overrated, but I can't deny that this album is incredible. Makes my top 100 comfortably. My highlights are Wake Up, In The Backseat, Rebellion (Lies) and Power Out.

If ever a band warranted the “rock symphony” moniker, it’s this one. Huge sounds paired with creative songwriting. The lyrics consistently reference a coming of age, constructing a universally accessible album.

While all the musicians are powerhouses, I’d walk through hell in a gasoline suit to hear Régine Chassagne sing. Amazing tone and emotive capabilities.

Tunnels and Wake Up are all-timers. There are a few songs that are a bit pedestrian, leading to a sub-90 score. Hell of a debut record.

I first came across Arcade Fire in 2005 when I saw them play “Rebellion” on David Letterman. They were surly, they were wild and they were extremely good. Like many who saw that performance I became a fan instantly and can clearly recall rushing out the very next day to buy this album on CD and it blew me away as it still does today some 17 years later. Regardless of what you think of ‘Funeral’ you have to admit as far as debut albums go its a pretty remarkable piece of art and only has the iconic Velvet Underground album ahead of it for highest ranking debut album on BEA

And to those who complain ‘Funeral’ is sitting ahead of this album and that album let me remind you that the BEA website is all about THE WISDOM OF THE CROWD by which albums aren’t ranked in direct comparison to other albums rather its a popularity contest where members rank (vote) for their favourite albums and if enough members vote for the one album it obtains a high ranking. So what I’m trying to say is if ‘ Funeral’ is sitting higher than say ‘Pet Sounds’ the assumption isn’t that its better or more important rather it’s simply more popular. And the statistics say this is a very popular album thats all

I remember when this album exploded, and thinking, "Who the hell is Arcade Fire?" I took a risk, and bought the record and was not disappointed! I actually think this is one of the best full albums released since 2000. It's almost a lost art to use the album as a complete piece of art, but Arcade Fire does it so well.

Your feedback for Funeral