Hot Fuss (studio album) by The Killers (US) 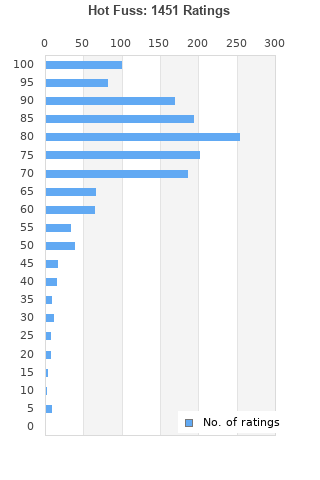 Hot Fuss is ranked as the best album by The Killers (US). 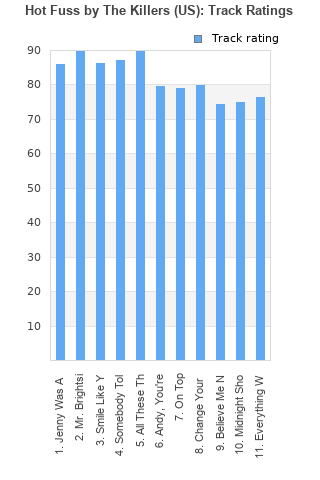 Rating metrics: Outliers can be removed when calculating a mean average to dampen the effects of ratings outside the normal distribution. This figure is provided as the trimmed mean. A high standard deviation can be legitimate, but can sometimes indicate 'gaming' is occurring. Consider a simplified example* of an item receiving ratings of 100, 50, & 0. The mean average rating would be 50. However, ratings of 55, 50 & 45 could also result in the same average. The second average might be more trusted because there is more consensus around a particular rating (a lower deviation).
(*In practice, some albums can have several thousand ratings)
This album is rated in the top 4% of all albums on BestEverAlbums.com. This album has a Bayesian average rating of 77.6/100, a mean average of 76.6/100, and a trimmed mean (excluding outliers) of 77.6/100. The standard deviation for this album is 15.9.

This album is extremely front heavy and the second side does not live up to the expectations created by the first 5 songs. All of these first 5 songs are a creation of pure energy and are irresistibly infectious. The choruses are brilliant and you leave this album with at least one of those 5 songs in your head for the rest of the day. However, after this we have a significant drop off and I do think every other track is filler and could really be cut from the album. I think it is because the melodies aren't as strong on these final tracks and so the group get a little exposed for being a bit simple and repetitive. Songs like Believe Me Natalie and Midnight Show are just bland for me and I keep checking the run time to see how long is left by the time these songs come on. Overall, if they could maintain that energy and quality of those first 5 tracks then this album would justify itself for being amongst the greatest.

Agree with many of the other comments on here. Half of the album is fantastic, the other half is very meh. My favourites are On Top, Jenny Was A Friend Of Mine, Mr Brightside (overplayed but still not old to me) and Smile Like You Mean It. Andy You're A Star, Believe Me Natalie and Everything Will Be Alright are very forgettable and the rest of the tracks are good. Still rate this very highly though, but it would be a lot higher if a few of those filler tracks were better.

I agree that it would be difficult for any artist to follow the excellent first 5-6 tracks. Each one is lightning in a bottle.

There's some good stuff on Side B, but the gap in quality with Side A is still glaring

Fantastic singles, but the rest of the album can't keep up.

I can agree with the comments about unevenness to a degree. The first 5 tracks are certainly all-time classics, but because they're so good, any song would fall short for almost any band.

However, Andy, You're a Star, Believe Me, Natalie, and Change Your Mind are all good tracks as well. Maybe they lose luster in the context of the album, but still good songs! But the other second half songs are certainly a step down.

The beginning of this album is one of the strongest 5-track runs I can think of; unfortunately it overshadows the back half of the record. The Killers came out swinging with this one and so many of these songs are instantly recognizable, there is no denying that Hot Fuss is a formidable force.

Favorite tracks: Somebody Told Me, Mr. Brightside, Jenny Was A Friend of Mine

The first five songs on this album - Jenny is a Friend of Mine, Mr Brightside, Smile Like Your Mean it, Somebody Told Me and All These Things that I've Done - are incredible songs and singlehandedly elevate this album to an all-timer. Even if the second half were all crap, those first five songs alone would make this album a must-listen. It just so happens that the second half of songs are pretty decent in their own right as well. I think the first half of Hot Fuss is superior to the second half - which is much more forgettable - but overall, the album is fantastic. I like Sam's Town better, but this album is easily one of the most indie albums of the 2000s.

I pretty much have the same problem as a couple of users before: The first 5 tracks are pure indie-rock-perfection, while the rest can't hold up with it. But honestly I always liked Hot Fuss for its celebration of glam and weirdness. Some second-half-tracks like Glamorous Indie Rock and Roll or Everything Will Be Alright feel just so over the top, that I can't help but smile and enjoy. So yeah, Hot Fuss could be better, but I like it for what it is.

One of the most uneven albums of all time. The first 5 tracks are an easy 90-95/100 average with everything after that being a 75/100 at best. Good listen though

Your feedback for Hot Fuss