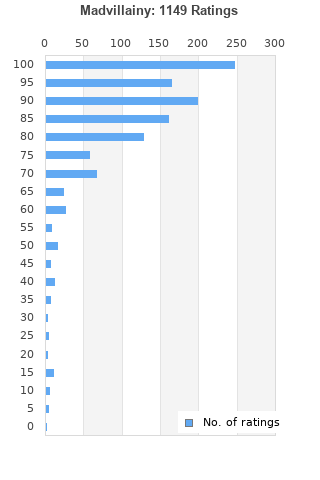 Madvillain - Madvillainy [New CD]
Condition: Brand New
Time left: 2d 18h 42m 36s
Ships to: Worldwide
$12.83
Go to store
Product prices and availability are accurate as of the date indicated and are subject to change. Any price and availability information displayed on the linked website at the time of purchase will apply to the purchase of this product.  See full search results on eBay

Madvillainy is ranked as the best album by Madvillain. 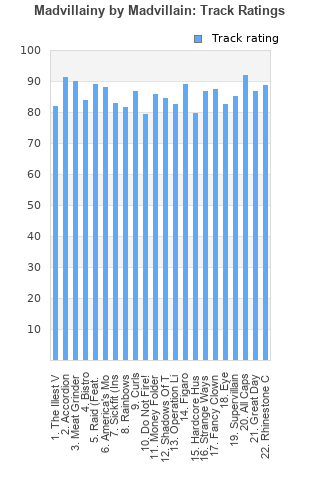 Rating metrics: Outliers can be removed when calculating a mean average to dampen the effects of ratings outside the normal distribution. This figure is provided as the trimmed mean. A high standard deviation can be legitimate, but can sometimes indicate 'gaming' is occurring. Consider a simplified example* of an item receiving ratings of 100, 50, & 0. The mean average rating would be 50. However, ratings of 55, 50 & 45 could also result in the same average. The second average might be more trusted because there is more consensus around a particular rating (a lower deviation).
(*In practice, some albums can have several thousand ratings)
This album is rated in the top 1% of all albums on BestEverAlbums.com. This album has a Bayesian average rating of 85.5/100, a mean average of 84.0/100, and a trimmed mean (excluding outliers) of 85.6/100. The standard deviation for this album is 16.9.

Very few out there like this one. I play this often when I'm stressed and just going on a drive as a result. The non-committal track lengths make it easy for me to connect with in those specific moments.

Otherwise, stylistically I love this album regardless. A number of highlights, but I prefer it from the top.

I really like MF Doom, and this is a unique and interesting album, but not top 100 of all time.

Gothic rap composed of agonizing loops, oppressive rhymes
and a flow as monotonous as spectacular. Madvillainy is a marvel of minimalism and darkness. The best 2000's album with Kid A.

MF DOOM and Madlib join forces to create one of the most interesting rap albums ever made.

Madvillainy is the result of the collaboration between rapper MF DOOM and beatmaker Madlib. First of all, MF DOOM is one of my favorite rappers: he is a major figure in underground rap and I like the mystery hovering around him. This album is the best rap album of the 2000s and one of the best rap albums of all time. Since "2001" by Dr. Dre released in 1999, rap artists are looking for catchy choruses and entangling melodies: this is the beginning of mainstream rap (with rappers such as 50 Cent or Eminem). Madvillainy is an album against the current, a UFO of the Rap game of the time. On this record, the beats are pretty minimalist and are not really melodious or catchy. Otis Jackson (aka Madlib) composed these prod with simplistic tools but returns to the very essence of hip-hop thanks to this simplicity. This album is just awesome and the myth that revolves around is really captivating.

Your feedback for Madvillainy