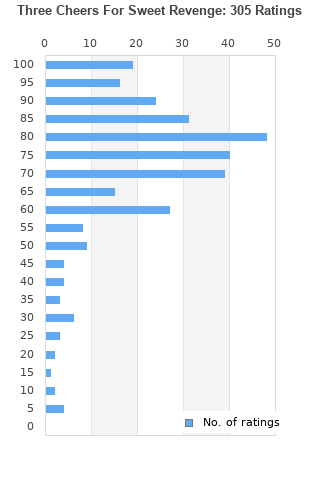 Three Cheers For Sweet Revenge is ranked 2nd best out of 9 albums by My Chemical Romance on BestEverAlbums.com.

The best album by My Chemical Romance is The Black Parade which is ranked number 334 in the list of all-time albums with a total rank score of 5,783.

Listen to Three Cheers For Sweet Revenge on YouTube 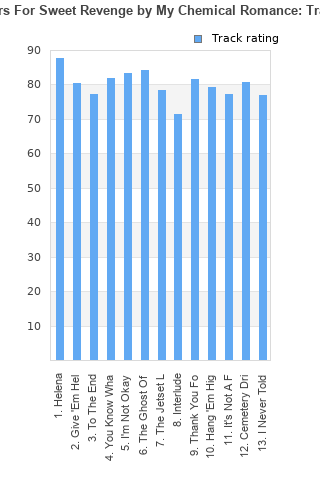 Rating metrics: Outliers can be removed when calculating a mean average to dampen the effects of ratings outside the normal distribution. This figure is provided as the trimmed mean. A high standard deviation can be legitimate, but can sometimes indicate 'gaming' is occurring. Consider a simplified example* of an item receiving ratings of 100, 50, & 0. The mean average rating would be 50. However, ratings of 55, 50 & 45 could also result in the same average. The second average might be more trusted because there is more consensus around a particular rating (a lower deviation).
(*In practice, some albums can have several thousand ratings)
This album has a Bayesian average rating of 73.5/100, a mean average of 72.2/100, and a trimmed mean (excluding outliers) of 73.6/100. The standard deviation for this album is 19.4.

Excellent album. After falling in love with the black parade, this albums shows me that MCR is far from one hit wonders and I will be checking the rest of their discography. Loved I'm not okay.

A very solid album, I dont't thin MCR have made a single bad album. I love the dark sound of this album, and songs like Cemetery Drive and I'm Not Okay stand out as some of my favourites. That being said the album can be a little monotonous at times, however for the most part a great album and easily one of MCR's best

Super nostalgic, it was great while it lasted, but admittedly hasn't aged that well.

I decided to give this album a go based off of how much I've always loved the incredible opener, Helena. In the end, I'm pleased with how much of this record I liked. Three Cheers has a great idea of flow and direction, and the production is fantastic. It's clear without being too clean and commercial, the drums being particularly noteworthy at least for me.

Three Cheers boasts a classic opener, an emphatic closer, and is generally an enjoyable ride of melodic and emotional dirges blended with the proteins of heavy punk.

Probably a band and album you have to have had to had grown up during their glory years. Though the dark times and emo vibe get a little annoying after a while the music and guitar work is awesome and mostly makes up for it. It’s a great introductory album to the emo genre.

It really sets the tone for the whole 2000s emo wave. If that's your thing, you'll thoroughly enjoy this record.

A landmark for the emo scene in the 2000s, awesome record.

Emo going in that meta, theatrical direction sometime in the mid-2000s, disputable where that all started but this definitely was one of the most ostentatious sign of the things to come. More pumped for the arenas than aimed at the usual angsty 14-year-old's headphones, they did have an undeniable way with a hook as much as they did covering self-consciously grandiose topics mostly concerning little-league goth themes with big, crunching, guitar-slashing numbers. The album overall is alternately bright and grody, energetic and morose, and bizzarely a lot of fun despite the obvious pretensions.

Loved the hell out of this in middle school. I remember seeing Helena come on MTV2 after school every day for almost a year.

Your feedback for Three Cheers For Sweet Revenge