A Ghost Is Born (studio album) by Wilco 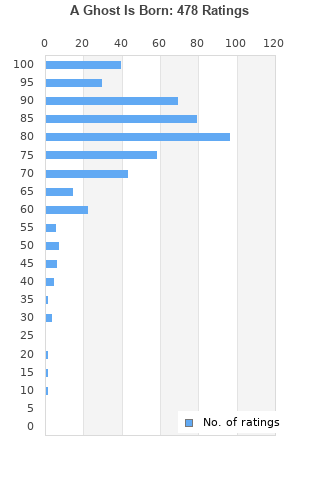 A Ghost Is Born is ranked 3rd best out of 19 albums by Wilco on BestEverAlbums.com.

The best album by Wilco is Yankee Hotel Foxtrot which is ranked number 48 in the list of all-time albums with a total rank score of 24,559. 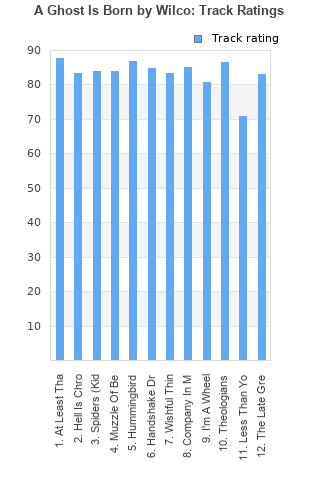 A Ghost Is Born rankings

A Ghost Is Born collection

A Ghost Is Born ratings

Rating metrics: Outliers can be removed when calculating a mean average to dampen the effects of ratings outside the normal distribution. This figure is provided as the trimmed mean. A high standard deviation can be legitimate, but can sometimes indicate 'gaming' is occurring. Consider a simplified example* of an item receiving ratings of 100, 50, & 0. The mean average rating would be 50. However, ratings of 55, 50 & 45 could also result in the same average. The second average might be more trusted because there is more consensus around a particular rating (a lower deviation).
(*In practice, some albums can have several thousand ratings)
This album is rated in the top 2% of all albums on BestEverAlbums.com. This album has a Bayesian average rating of 80.4/100, a mean average of 79.7/100, and a trimmed mean (excluding outliers) of 80.5/100. The standard deviation for this album is 14.0.

A Ghost Is Born favourites

A Ghost Is Born comments

Was never going to be as good as Yankee Hotel Foxtrot, but it still contains some good songs. At Least That's What You Said and The Late Greats are my highlights. There is a bonus track on another version of the album called Panthers which is awesome too, shame it didn't make it on to the album. 15 minutes of Less Than You Think just kills it as an album for me though - makes the album way too long.

My favourite Wilco albums will always be ‘Y.H.F’ and ‘Summerteeth’ but this one sits comfortably in third place. My favourite track is “Less Than You Think”, I simply can’t explain how 11 minutes of white noise sounds incredible to my ears as Tweedy mimics a migraine in auditory fashion such as he was experiencing at the time

Missed opportunity though, “Less Than You Think” should have been the album closer. How amazing would it have been to end on that white noise migraine section? I get why they went with “The Late Greats” but still . . . .

More ambitious than usual, maybe doesn't have the consistency to back it up, but it's always good to hear a guitar based album - something that wasn't very common at that period of time.

The other perfect Wilco record, and a fantastic follow-up to the magnificent Yankee Hotel Foxtrot. In some ways, the songs are even better, but the production isn't quite as strong and many of the songs received a more enjoyable treatment on the live album.

A well done experimental on par with Yankee Hotel Foxtrot (maybe a little better). Less Than You Think had zero business being 15 minutes long.

Key Three: At Least That's What You Said, I'm a Wheel, Theologians

Perhaps too formulaic and Beatles-esque, but there's not really a bad song on this record and the songwriting is very good. Lots of good choruses that will stay in your head, and as usual with Wilco, great instrumentation.

By removing 'I'm a Wheel' and maybe placing 'Less Than You think' as a bonus track, the album would've ended perfect. I feel it would be a much stronger album if it closed with the perfect 4-pack of Wishful Thinking/Company In My Back/Theologians/The Late Greats. Those are all strong tracks and the album would be more memorable and playable.
And, Muzzle Of Bees is my fav Wilco song.

I have to rank this as my favourite Wilco album as it's the one I return to the most. A little less accessible than their previous two outings, but I prefer the pacing and looser feel of this album. It's not a "difficult" experimental album though as the tracks are predominately very melodic. Kidsmoke is the main exception, on which they take on a more Motorik (Krautrock) influence. They manage to bring their classic rock sensibilities to this track too though, making it a highlight.

Your feedback for A Ghost Is Born