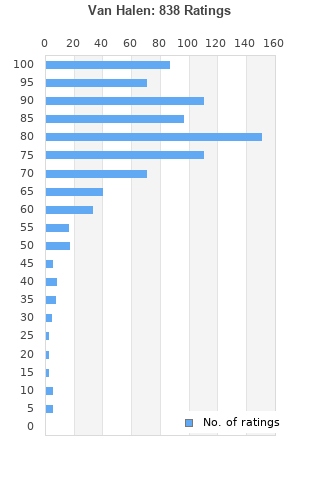 Van Halen - vinyl
Condition: Used
Time left: 9m 25s
Ships to: Worldwide
$12.50
Go to store
Product prices and availability are accurate as of the date indicated and are subject to change. Any price and availability information displayed on the linked website at the time of purchase will apply to the purchase of this product.  See full search results on eBay

Van Halen is ranked as the best album by Van Halen. 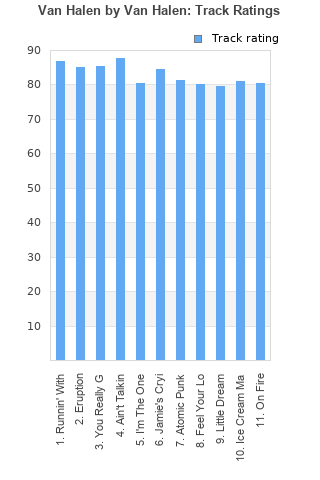 Rating metrics: Outliers can be removed when calculating a mean average to dampen the effects of ratings outside the normal distribution. This figure is provided as the trimmed mean. A high standard deviation can be legitimate, but can sometimes indicate 'gaming' is occurring. Consider a simplified example* of an item receiving ratings of 100, 50, & 0. The mean average rating would be 50. However, ratings of 55, 50 & 45 could also result in the same average. The second average might be more trusted because there is more consensus around a particular rating (a lower deviation).
(*In practice, some albums can have several thousand ratings)
This album is rated in the top 2% of all albums on BestEverAlbums.com. This album has a Bayesian average rating of 80.2/100, a mean average of 79.0/100, and a trimmed mean (excluding outliers) of 80.3/100. The standard deviation for this album is 16.7.

pick up lines set to music

This is an electrifying Debut from the rock stars Van Halen. As far as lead guitar innovation goes, perhaps nothing can top Eddie in this '78 release.

I was somewhat dismayed at the lack of space that Roth gives Eddie on this record - yet the duality between their contributions makes for hectic, exciting interplay throughout the album.

Worshippers of indulgent rock stardom shooting through the airwaves should spin this on the regular!

One of the best guitar album ever

Serious candidate for best debut of all time.

It's a really solid album, especially considering it's Van Halen's debut album. All the songs are really good, although some personal favorites are Feel Your Love Tonight, Atomic Punk and Ice Cream Man. You Really Got Me is an amazing cover, with a memorable solo and it's the song that got me into the band.There are really no bad songs in the album, although it has some weak moments too, like I'm The One. It's undeniable that this band had style right from the beginning, although the lyrics can be pretty awkward sometimes, being too focused on women and sex. The sound of the album is amazing and the decision to have a single guitar track (most of the time) panned on one side really makes the album similar to a live performance, without losing the power of Eddie's playing. The rhythmic section is really strong: the bass is heavy and groovy and the drums really carry the songs at a fast pace.
The guitar playing is obviously amazing and it's the center of the album. Eddie's solos, which are what drew many fans into Van Halen will be remembered forever in Eruption, one of the best guitar songs of all time.

Your feedback for Van Halen