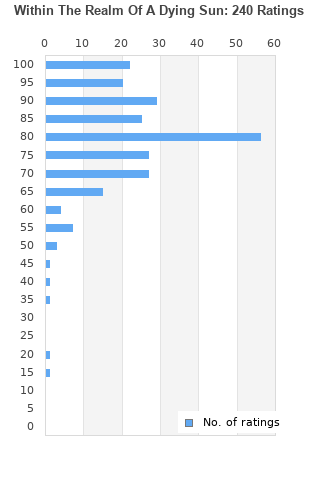 Within the Realm of a Dying Sun by Dead Can Dance: New
Condition: Brand New
Time left: 1d 8h 50m 31s
Ships to: Worldwide
$17.07
Go to store
Product prices and availability are accurate as of the date indicated and are subject to change. Any price and availability information displayed on the linked website at the time of purchase will apply to the purchase of this product.  See full search results on eBay

Within The Realm Of A Dying Sun is ranked as the best album by Dead Can Dance.

Listen to Within The Realm Of A Dying Sun on YouTube

Within The Realm Of A Dying Sun track list 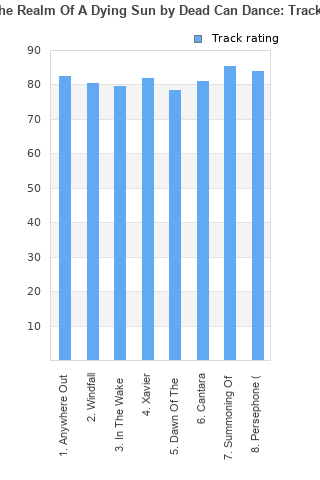 Within The Realm Of A Dying Sun rankings

Within The Realm Of A Dying Sun collection

Within The Realm Of A Dying Sun ratings

Rating metrics: Outliers can be removed when calculating a mean average to dampen the effects of ratings outside the normal distribution. This figure is provided as the trimmed mean. A high standard deviation can be legitimate, but can sometimes indicate 'gaming' is occurring. Consider a simplified example* of an item receiving ratings of 100, 50, & 0. The mean average rating would be 50. However, ratings of 55, 50 & 45 could also result in the same average. The second average might be more trusted because there is more consensus around a particular rating (a lower deviation).
(*In practice, some albums can have several thousand ratings)
This album is rated in the top 2% of all albums on BestEverAlbums.com. This album has a Bayesian average rating of 80.1/100, a mean average of 79.9/100, and a trimmed mean (excluding outliers) of 80.5/100. The standard deviation for this album is 13.4.

Within The Realm Of A Dying Sun favourites

Within The Realm Of A Dying Sun comments

The melancholy in the vocals of Brendan Perry is nicely balanced by his decisiveness to give the lyrics of the songs the necessary power. Lisa G. does what she likes. She uses her blessed voice as an instrument and delivers, with the right drama and dynamics, vocals that perfectly match the atmosphere of the song. In sharp contrast with the first album, "Within" is very spatial. The voices and instruments are given sufficient space to be convincing. On the first album "Dead Can Dance" (great cover though) the essential components are often too much in the back of the mix. Some songs on “Within the Realm” have no vocals but they are no less strong. "Windfall" threatens and evokes an uncomfortable feeling. In my imagination the track describes a windy and rainy landscape in the North of France where during World War I so many lost their lives as if they were cut to pieces by a blind war machine. The music that drifts over the landscape is an echo of the misery to which so many innocent people were condemned by a small elite of perfidious nationalists. The absolute highlight of this album is without a doubt "Cantara". This song slowly builds up but degenerates into hellish rhythm and aetheral, hurried singing. This track is rather exceptionally (or that’s what I guess) a composition where both musicians worked together. It's a shame they didn't do this anymore: the sound colors of their two voices fit together very well. The song was not overly provided with arrangements. Except for the haunting bass drum, the other percussion is further away in the mix, but the interpretation of the group is so convincing that this song effortlessly entrances me. For many songs, images of the Middle Ages come to my mind. This is timeless music and completely unique. I have a lot of respect for Brendan Perry. What he does is honest and authentic, and that can also be said of his personality. He is not a typical rock star, far from it. We can all be happy about that. And Lisa G., well … she did a lot of soundtracks, worked with different musicians (other than Brendan Perry) and she cannot be matched. No way.

So dark and unique. Very interesting album. Somehow they could perfectly mix a medieval vibe with 80's pop, and it doesn't even sound weird.

After several listening, I find this still their best after all, and Into the Labyrinth and Aion come second among all their works, but this record is unparalleled in terms of atmosphere on the score arrangement. The only things I don't like about it are the utter separation into 4 tracks by Brendan and the other 4 by Lisa, and the repetition of Cantara (great song though). Yes, I don't like the sequencing of songs, although they are of course masterpieces. Apart from this, the scale of grandness is never to be seen in their later work as of 2014, probably in some songs but not in such a big cluster on a single album.

In all these years of my endeavor of searching for something similar in style and in quality, it all just goes in vain and brings me back to Dead Can Dance ultimately..., because you simply can't say those neo-classical darkwave works by those German labels have anything better; for me, there's no better or deeper singing, nor better-innovative scoring. So I guess they're just not replicable. Surely I'm still expecting medieval or Renaissance music with a hybrid of neo-classical darkwave and ethereal chanting mixed in, but anything in this genre that would rival DCD might still be their own works, in future.

A brilliant band, 2 great voices, no-one has song titles like these guys - reflects the music, already and just beautiful, beautiful songs. The last 2 on this album are sublime.

Prepare yourself for this one and keep an open mind. Some seriously different music here.

No rotation for this album. It bums me out! I was listening to Gregorian chants in the early 80s and somehow I missed out on Dead Can Dance in the late 80s. It's my loss. I find The Serpent's Egg album more engaging than Within the Realm of a Dying Sun. Lisa Gerrard proves there that she can be both ethereal and heavy. Brendan Perry's voice is good but relatively less captivating than Gerrard's. That whole album is lovely beyond description.

Your feedback for Within The Realm Of A Dying Sun