Beatles For Sale (studio album) by The Beatles 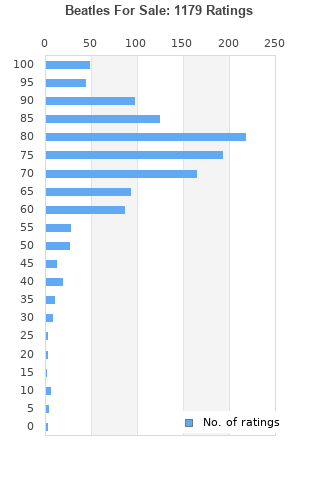 Beatles For Sale is ranked 11th best out of 65 albums by The Beatles on BestEverAlbums.com.

The best album by The Beatles is Abbey Road which is ranked number 3 in the list of all-time albums with a total rank score of 82,893. 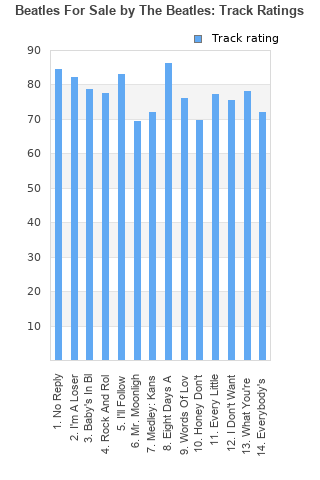 Rating metrics: Outliers can be removed when calculating a mean average to dampen the effects of ratings outside the normal distribution. This figure is provided as the trimmed mean. A high standard deviation can be legitimate, but can sometimes indicate 'gaming' is occurring. Consider a simplified example* of an item receiving ratings of 100, 50, & 0. The mean average rating would be 50. However, ratings of 55, 50 & 45 could also result in the same average. The second average might be more trusted because there is more consensus around a particular rating (a lower deviation).
(*In practice, some albums can have several thousand ratings)
This album is rated in the top 16% of all albums on BestEverAlbums.com. This album has a Bayesian average rating of 75.1/100, a mean average of 74.3/100, and a trimmed mean (excluding outliers) of 75.2/100. The standard deviation for this album is 15.3.

There are some great songs, but they are watered down by filler and cover songs. A step down from A Hard Day's Night

Another great early Beatles record, my only issue is the covers on this are weaker than previous Beatles albums.
Best song(s): No Reply; I'll Follow the Sun; Eight Days a Week; What You're Doing

Best tracks: Rock N Roll Music, Eight Days a Week, What You're Doing
Worst tracks: Honey Don't, I Don't Want to Spoil the Party, Everybody's Trying to Be My Baby

Good album i like What are you doing, eight Days a week an im a loser. For me one of their best work.

Fantastic album. Have always enjoyed it more than A Hard Day's Night and Help!, despite most people saying this is the red-headed step-child of the early albums.

I Don't Want To Spoil the Party is the hidden gem of the album and my favourite.

I have mixed feelings on this one. On the one hand, there are some truly great tracks here like No Reply and Eight Days A Week. On the other hand, there's a whole lot of filler and bland covers. It's probably the worst of the early Beatles albums and it feels like a big step back from A Hard Day's Night. I still think it's an important chapter in the history of the Beatles but I definitely don't come back to this one very often.

It's the Beatles so it's at least a good album. Least of the Beatles albums so far, however.

Often a lower ranked album on Beatles lists, but mostly for the lackluster covers on the album like "Words of Love". At least to Beatles standards, a slight disappointment, but a decent Beatles album is often a masterpiece compared to other works of the time.

Your feedback for Beatles For Sale