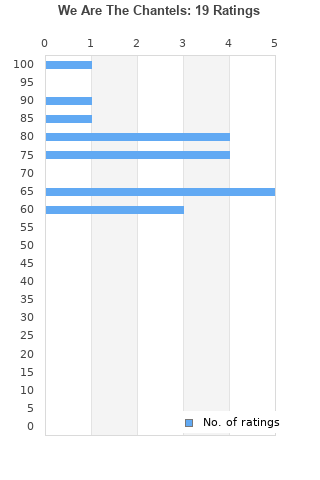 THE CHANTELS - We Are the THE CHANTELS VINYL LP DO-WOP Roulette MONO EX/VG+
Condition: Used
$29.99

We Are the Chantels Theres Our Song Ag CD
Condition: Very Good
$15.73 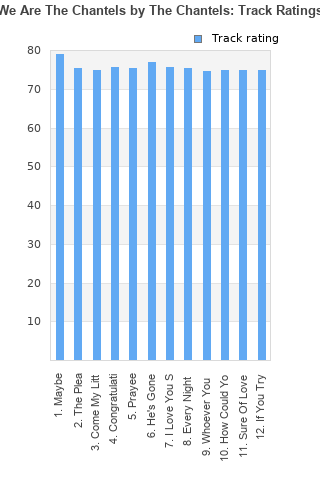 We Are The Chantels rankings

We Are The Chantels collection

We Are The Chantels ratings

Rating metrics: Outliers can be removed when calculating a mean average to dampen the effects of ratings outside the normal distribution. This figure is provided as the trimmed mean. A high standard deviation can be legitimate, but can sometimes indicate 'gaming' is occurring. Consider a simplified example* of an item receiving ratings of 100, 50, & 0. The mean average rating would be 50. However, ratings of 55, 50 & 45 could also result in the same average. The second average might be more trusted because there is more consensus around a particular rating (a lower deviation).
(*In practice, some albums can have several thousand ratings)
This album has a Bayesian average rating of 73.7/100, a mean average of 74.2/100, and a trimmed mean (excluding outliers) of 74.2/100. The standard deviation for this album is 10.8.

We Are The Chantels favourites

We Are The Chantels comments

Though this LP is far from a classic, it's historically significant in many ways. It all begins with Maybe, the big hit that made The Chantels one of the first African-American "girl groups" to hit high in the R&B and pop charts. The song's popularity endures and has been covered over the years by Janis Joplin, Miley Cyrus and John Frusciante. This LP was assembled in the early days of the LP format. It took advantage of the success of Maybe and added the other A sides and B sides recorded around the same time. These tracks would inspire the hundreds of girl groups that would follow The Chantels in the 60s and 70s.

Also of note is the role of lead singer Arlene Smith, whose vocals are excellent and effective, but significantly she is credited as writing a handful of tracks here (likely more, since credits were often tossed around in those days). That creative control was rare for women in the 50s and 60s, let alone African American women, so the significance is recognized here.

The music is straight forward traditional vocal pop, with backing vocals that are so rigid that it's easy to forget they are there. The group embraces the heartache and teenage yearning that likely earned them their spot in the charts. This yearning charm is this LP's greatest strength.

Give it a listen, at least for historical significance. This is a modest triumph and a trendsetter that is just hard to recognize, considering the impact of the music that followed soon after these recordings.

Note: The contemporary streaming album features the original LP cover photo of the group. The original album tracks are 1-12, with bonus tracks 6 and 7 sandwiched in the middle. Seven additional bonus tracks are at the end, some of which were included on later reissues of the LP.

Condensed to a 7" Single:
A-Side: Maybe
B-Side: Every Night (I Pray)

The album that laid the foundation for all future girl group records.

Your feedback for We Are The Chantels