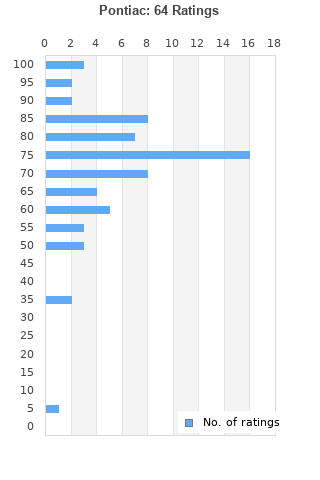 Pontiac is ranked as the best album by Lyle Lovett. 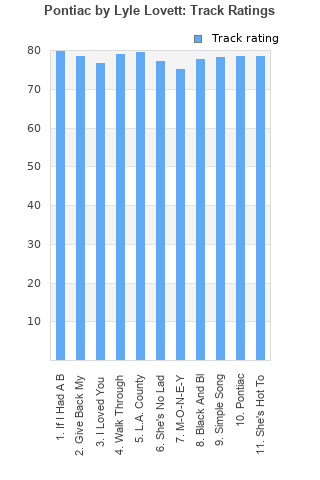 Rating metrics: Outliers can be removed when calculating a mean average to dampen the effects of ratings outside the normal distribution. This figure is provided as the trimmed mean. A high standard deviation can be legitimate, but can sometimes indicate 'gaming' is occurring. Consider a simplified example* of an item receiving ratings of 100, 50, & 0. The mean average rating would be 50. However, ratings of 55, 50 & 45 could also result in the same average. The second average might be more trusted because there is more consensus around a particular rating (a lower deviation).
(*In practice, some albums can have several thousand ratings)
This album is rated in the top 25% of all albums on BestEverAlbums.com. This album has a Bayesian average rating of 74.3/100, a mean average of 73.3/100, and a trimmed mean (excluding outliers) of 74.5/100. The standard deviation for this album is 15.7.

Lyle Lovett was signed to MCA with Nanci Griffith and Steve Earle and other left-of-center singer-songwriters in the "great credibility scare" of the mid 1980s. Like the other artists I mentioned, he was a folk singer-songwriter from Texas that was marketed as a mainstream country artist with the help of producer Tony Brown.

Lovett's biggest strength is his sense of style. I respect his efforts to incorporate many American genres in his music, including jazz, classic R&B, western swing, gospel and blues. It's all combined here but executed even better on his Joshua Judges Ruth record.

It's the lyrics that might turn you off.
Right off the bat, Lovett sings about Tonto telling the Lone Ranger to kiss his ass as he takes his horse to sea. Next he calls an attractive female a "s--tkicker redneck woman." Weird stuff.

Nevertheless, the combined styles are truly unique and the production will keep you entertained, even if you find yourself scratching your head over the lyrics.

Check out Joshua Judges Ruth for some needed relief

A Side: LA County
B Side: Walk Through the Bottomland

Lyle Lovett makes another record of his trademark mix of jazzy western swing, coffee house ballads, and clever lyrics. Not quite as good as the previous outing but highly enjoyable. Recommended especially for those looking for something that sounds original.

Your feedback for Pontiac