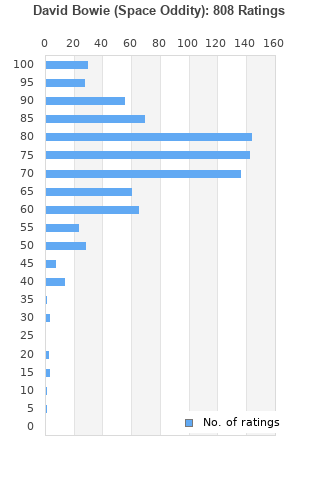 David Bowie - Space Oddity - Original 1969 US Vintage Vinyl - Mega Rare !!!
Condition: Used
Time left: 41m 2s
Ships to: Worldwide
$34.99
Go to store
Product prices and availability are accurate as of the date indicated and are subject to change. Any price and availability information displayed on the linked website at the time of purchase will apply to the purchase of this product.  See full search results on eBay

David Bowie (Space Oddity) is ranked 11th best out of 83 albums by David Bowie on BestEverAlbums.com.

The best album by David Bowie is The Rise And Fall Of Ziggy Stardust And The Spiders From Mars which is ranked number 9 in the list of all-time albums with a total rank score of 61,317. 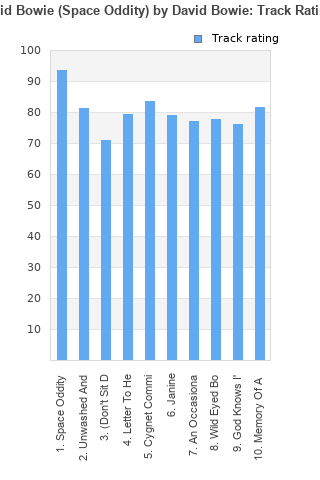 Rating metrics: Outliers can be removed when calculating a mean average to dampen the effects of ratings outside the normal distribution. This figure is provided as the trimmed mean. A high standard deviation can be legitimate, but can sometimes indicate 'gaming' is occurring. Consider a simplified example* of an item receiving ratings of 100, 50, & 0. The mean average rating would be 50. However, ratings of 55, 50 & 45 could also result in the same average. The second average might be more trusted because there is more consensus around a particular rating (a lower deviation).
(*In practice, some albums can have several thousand ratings)
This album is rated in the top 24% of all albums on BestEverAlbums.com. This album has a Bayesian average rating of 74.6/100, a mean average of 74.1/100, and a trimmed mean (excluding outliers) of 74.6/100. The standard deviation for this album is 13.7.

Mostly a one-song album, but what a song.

A superb album which has a leg strongly footed in the psychedelic scene. Beautiful musicianship, particularly strings, provide a magic backdrop for some of Bowie's best vocals in my view. An album which still sounds fresh even today (2020)

Good album, though it dragged towards the end.

Bowie’s 2nd album is a very good one indeed. Space Oddity is one of his best songs. Unwashed And Somewhat Slightly Dazed is a deep cut waiting to be found. Cygnet Committee is another underrated deep cut. This is Bowie’s interpretation of the end of the hippie era

Perhaps not Bowie's most venerated album but quite enjoyable. Apart from the seminally iconic Space Oddity there are some hidden gems:

Genuinely love this album. The 2nd album I ever bought, way back in 1972. The title track is now a classic and Letter to Hermione is his most underrated song. Beautiful. Wild Eyed Boy from Freecloud contains one of his best lyrics. Cygnet Committee is a nod to Bob Dylan. Overall not perfect but hugely enjoyable.

Apart from "Space Oddity" and "Letter to Hermione" there isn't many things here that gets me.