The Next Day (studio album) by David Bowie 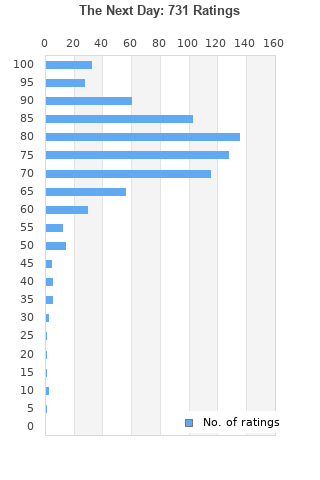 The Next Day is ranked 12th best out of 89 albums by David Bowie on BestEverAlbums.com.

The best album by David Bowie is The Rise And Fall Of Ziggy Stardust And The Spiders From Mars which is ranked number 9 in the list of all-time albums with a total rank score of 56,305. 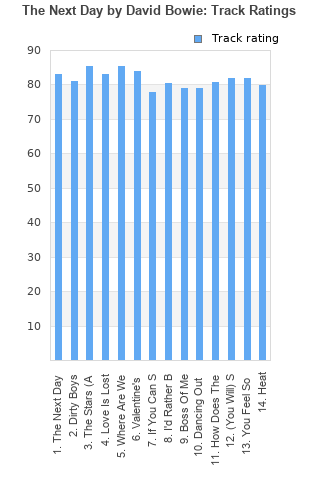 The Next Day rankings

The Next Day collection

The Next Day ratings

Rating metrics: Outliers can be removed when calculating a mean average to dampen the effects of ratings outside the normal distribution. This figure is provided as the trimmed mean. A high standard deviation can be legitimate, but can sometimes indicate 'gaming' is occurring. Consider a simplified example* of an item receiving ratings of 100, 50, & 0. The mean average rating would be 50. However, ratings of 55, 50 & 45 could also result in the same average. The second average might be more trusted because there is more consensus around a particular rating (a lower deviation).
(*In practice, some albums can have several thousand ratings)
This album is rated in the top 4% of all albums on BestEverAlbums.com. This album has a Bayesian average rating of 77.0/100, a mean average of 76.1/100, and a trimmed mean (excluding outliers) of 77.1/100. The standard deviation for this album is 13.4.

The Next Day favourites

The Next Day comments

One of my favorites of the decade and imo one of the finest records Bowie eve put out. Should be way more beloved.
Best song(s): The Next Day; The Stars are out Tonight; Love is Lost; Valentine's Day; How Does the Grass Grow; Set the World on Fire; You Feel So Lonely You Could Die

A surprise comeback album the first 8 tracks are awesome it tails off a bit towards the end but the point was made.

And he's back...
And he's not lost his touch.
This is a fantastic album, full of beauty, considerations of mortality...
What a man.

Bowie's peek into the 2010s is an impressive one, starting here to show up his jazz influences.

I got into Bowie as a teenager in 2004 and this was the first new release I saw by him so I was really excited for it. I loved it initially, but over time there is about 5 middling tracks toward the second half that drag it down. Very strong start and great end, mind. For the record - I absolutely love the artwork.

The Stars (Are Out Tonight)
Where Are We Now?
(You Will) Set the World on Fire
Valentine's Day

I love this great piece of art.

A very good album. I would probably rate this album higher than most of his albums released during his very long creative height.

Your feedback for The Next Day