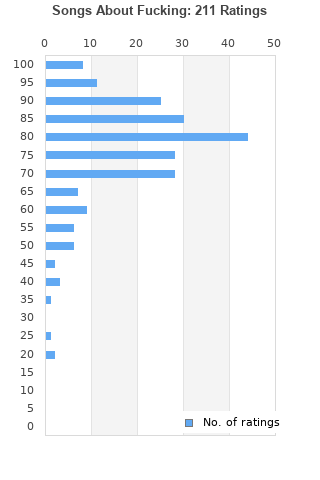 Big Black - Songs About Fucking Original Vinyl LP
Condition: Used
Time left: 3d 19h 18m 44s
Ships to: Worldwide
$15.00
Go to store
Product prices and availability are accurate as of the date indicated and are subject to change. Any price and availability information displayed on the linked website at the time of purchase will apply to the purchase of this product.  See full search results on eBay

Songs About Fucking is ranked as the best album by Big Black. 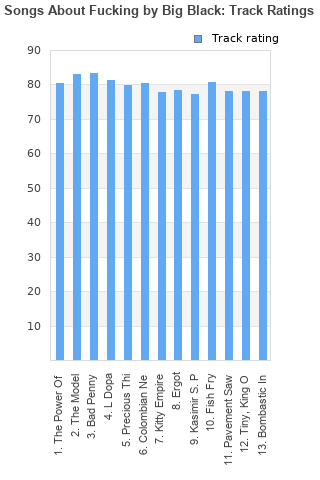 Rating metrics: Outliers can be removed when calculating a mean average to dampen the effects of ratings outside the normal distribution. This figure is provided as the trimmed mean. A high standard deviation can be legitimate, but can sometimes indicate 'gaming' is occurring. Consider a simplified example* of an item receiving ratings of 100, 50, & 0. The mean average rating would be 50. However, ratings of 55, 50 & 45 could also result in the same average. The second average might be more trusted because there is more consensus around a particular rating (a lower deviation).
(*In practice, some albums can have several thousand ratings)
This album is rated in the top 5% of all albums on BestEverAlbums.com. This album has a Bayesian average rating of 77.1/100, a mean average of 76.8/100, and a trimmed mean (excluding outliers) of 77.4/100. The standard deviation for this album is 14.2.

Considered a classic, Songs About Fucking certain contains a half hour of noisy madness. I think I may need a few more listen in the future to understand more of this band since they are a well known act in the noise rock community. But I think this this album is cool to listen if you wanna listen to something that is literally noisy (in a good way)...

I think this could be an amazing album if it wasn't noise rock... meaning the mix/choice of tone vs a bit more clarity. It's still pretty rad and I suppose it's on purpose, but some of it I think would be much more enjoyable if mixed better/not so muffled on the tone.

Also I wonder if this was an ep or shorter album if I'd like it more... just can't do 13 songs of this style.

It's alright, but I found it difficult to get into.

The A side of this album might be the most perfect cacophony of noise rock ever created.

Brilliant album, but I could do without the inadequate mixing of the cd version due to Albini's hatred of the format. Steve Albini, you are wrong - this is the digital age.

A musical screwdriver... into the head. A fantastic listen

Your feedback for Songs About Fucking