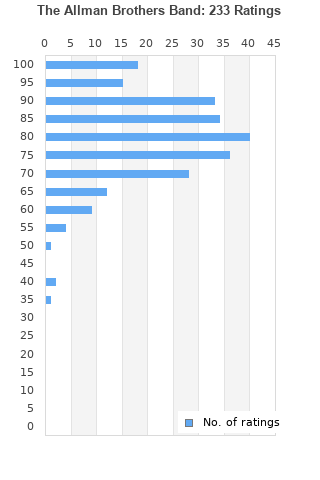 BADLANDS DREAMS IN THE SHADOW 2CD RAY GILLEN BLACK SABBATH
Condition: Like New
Time left: 39m 22s
Ships to: Worldwide
$25.00
Go to store
Product prices and availability are accurate as of the date indicated and are subject to change. Any price and availability information displayed on the linked website at the time of purchase will apply to the purchase of this product.  See full search results on eBay

The best album by The Allman Brothers Band is At Fillmore East which is ranked number 385 in the list of all-time albums with a total rank score of 5,085. 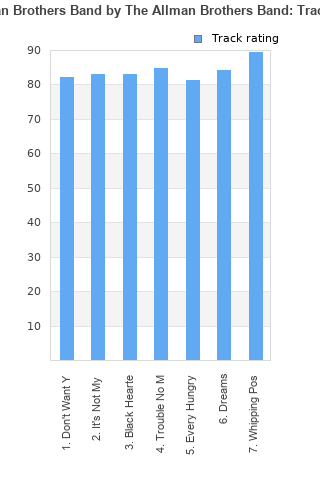 Rating metrics: Outliers can be removed when calculating a mean average to dampen the effects of ratings outside the normal distribution. This figure is provided as the trimmed mean. A high standard deviation can be legitimate, but can sometimes indicate 'gaming' is occurring. Consider a simplified example* of an item receiving ratings of 100, 50, & 0. The mean average rating would be 50. However, ratings of 55, 50 & 45 could also result in the same average. The second average might be more trusted because there is more consensus around a particular rating (a lower deviation).
(*In practice, some albums can have several thousand ratings)
This album is rated in the top 2% of all albums on BestEverAlbums.com. This album has a Bayesian average rating of 80.5/100, a mean average of 80.1/100, and a trimmed mean (excluding outliers) of 80.8/100. The standard deviation for this album is 12.6.

Incredible debut, the founding father of southern rock albums, rarely if ever equaled. It doesn't get much better than this.
Solid lineup of tracks from beginning to end. Highlights include, 'Black Hearted Woman' which has an almost Hendrix sound to it, and one of the greatest LP climax's with 'Whipping Post'. Perfect balance between blues and southern rock. The boys bare all in a way that later albums would never capture.

Heavy blues at its finest.

A stunning debut that essentially invented the Southern Rock genre. Probably the best studio album they ever made. Criminally underrated.

The best studio Allman Brothers Band album in my opinion, remains unfortunately (still) their most underrated effort. A raw blues-rock experience without the country influences that were introduced in later albums.

A pretty decent debut, unnoticed and ignored at the time of its release. This one is the most raw and energetic of all their studio releases, so it's a real treat to hear all these bluesy songs before they became smooth and slick by the time they got to Fillmore East.

...and so it begins. The Allman Brothers first masterpiece. How do these guys get so overlooked?

How is this masterpiece this low on BEA list?(currently 1,797)

Stellar debut by the Allmans. Dreams may be somewhat weak, but the rest is top notch material. Definitely hinting at the three masterpieces to come.

Your feedback for The Allman Brothers Band