At Fillmore East (live album) by The Allman Brothers Band 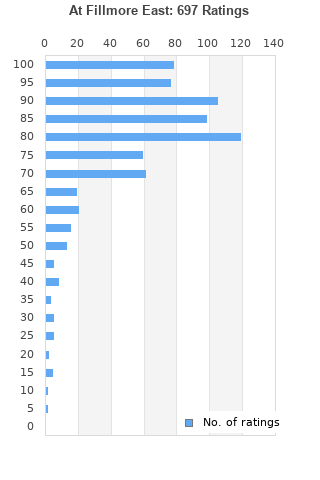 At Fillmore East is ranked as the best album by The Allman Brothers Band. 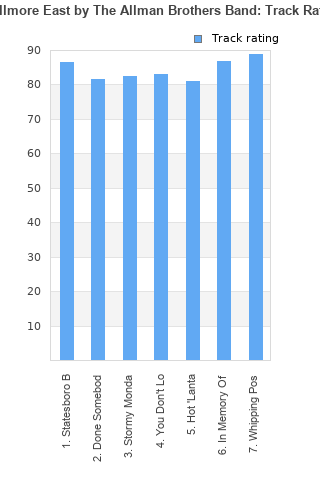 Rating metrics: Outliers can be removed when calculating a mean average to dampen the effects of ratings outside the normal distribution. This figure is provided as the trimmed mean. A high standard deviation can be legitimate, but can sometimes indicate 'gaming' is occurring. Consider a simplified example* of an item receiving ratings of 100, 50, & 0. The mean average rating would be 50. However, ratings of 55, 50 & 45 could also result in the same average. The second average might be more trusted because there is more consensus around a particular rating (a lower deviation).
(*In practice, some albums can have several thousand ratings)
This album is rated in the top 1% of all albums on BestEverAlbums.com. This album has a Bayesian average rating of 81.5/100, a mean average of 80.1/100, and a trimmed mean (excluding outliers) of 81.6/100. The standard deviation for this album is 16.5.

I see it held in high regard and can understand that. It doesn't quite land for me though - I have enjoyed some of this southern rock stuff - but I appreciate this is not my most liked area of music and therefore I don't invest as much in it

The music and style were amazing for the era in time; a combination of southern rock, blues, and amazing twin guitar lead soloing. It's an incredible excursion from beginning to end. Great musicianship.

Not my favorite assemblage of Allmans songs, but the music is fire.

Simply one of the greatest live albums of all time. You can tell they were having so much fun and there was so much passion. Sad that most of them are dead now.

I hear to it with joy and passion. It is the best live album you can get. Bets songs Statesboro Blues, Trouble No More, Mountain Jam, In Memory Of Elizabeth Reed.

Though some of the songs are a wee bit too lengthy, the musicianship is stellar throughout - particularly the guitars of Duane Allman and Dickey Betts. A wonderful experience, though I find my mind wandering a bit in the middle of Whipping Post and You Don't Love Me. Great songs, amazing playing, and a very atmospheric live record, but I cannot call it perfect.

Definitely agree that this is one of the top live albums of all time. A great mixture of blues, tilting it's hat towards jazz. Some absolutely blistering guitar work on this album. Many think that Skynyrd laid the foundations for Southern Rock. This albums definitely proves that not to be the case.

Your feedback for At Fillmore East