Brothers And Sisters (studio album) by The Allman Brothers Band 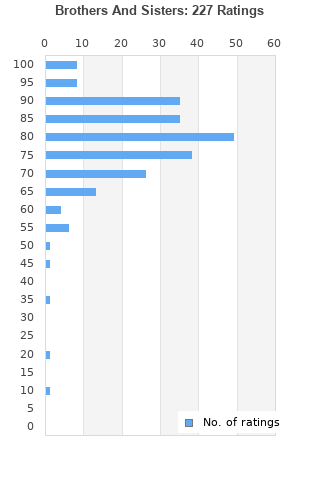 THE ALLMAN BROTHERS BAND- BROTHERS AND SISTERS- GATEFOLD LP
Condition: Used
Time left: 9h 1m 43s
Ships to: Worldwide
£25.00
Go to store
Product prices and availability are accurate as of the date indicated and are subject to change. Any price and availability information displayed on the linked website at the time of purchase will apply to the purchase of this product.  See full search results on eBay

Brothers And Sisters is ranked 4th best out of 50 albums by The Allman Brothers Band on BestEverAlbums.com.

The best album by The Allman Brothers Band is At Fillmore East which is ranked number 386 in the list of all-time albums with a total rank score of 5,072. 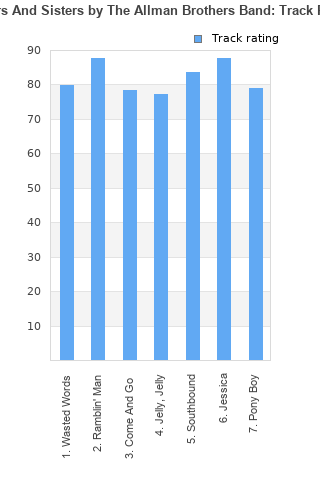 Rating metrics: Outliers can be removed when calculating a mean average to dampen the effects of ratings outside the normal distribution. This figure is provided as the trimmed mean. A high standard deviation can be legitimate, but can sometimes indicate 'gaming' is occurring. Consider a simplified example* of an item receiving ratings of 100, 50, & 0. The mean average rating would be 50. However, ratings of 55, 50 & 45 could also result in the same average. The second average might be more trusted because there is more consensus around a particular rating (a lower deviation).
(*In practice, some albums can have several thousand ratings)
This album is rated in the top 2% of all albums on BestEverAlbums.com. This album has a Bayesian average rating of 79.1/100, a mean average of 78.9/100, and a trimmed mean (excluding outliers) of 79.4/100. The standard deviation for this album is 11.4.

Stood in HMV, Truro, Cornwall, UK, on HMV record store day with Caravan In The Land of Grey And Pink tucked under my arm, I got talking to a complete stranger who was equally enthusiastic about his pristine vinyl collection. So thank you to you stranger, for introducing me to a band I had never listened to before and for suggesting that I might like this, for sure I do! Worth having just for the Jazz/blues piano which really comes to life on Jelly Jelly and Southbound. Some superb lead guitar work adds to the experience. And, I never realised that Jessica is the theme tune for 'Top Gear'. Love it!!

Lyricism is a bit vague but solid instrumental work with the organ and guitar standing out in particular.

I like this a lot more than Fillmore East. It's a lot less Jazzy and more Country, which I guess is good for me at least.

less bluesy than earlier albums, but still a good album.

Dickey Betts’ guitar dominates and he penned the albums two-standout tracks Rambling Man and Jessica. The former reached US #2 whilst the latter will be familiar to most as the theme to BBC TV motoring programme Top Gear. That aside the track contains some sublime playing not only from Dickey Betts but also from new keyboard player Chuck Leavell whose piano solo is simply sublime. Southbound and Wasted Words are also songs of great merit but the album is sold throughout with no weak tracks.

From a songwriting perspective, this is the Allman's most consistent album. That's what makes it my favorite of their studio albums.

After the death of Duane Allman and Berry Oakley, they had one more really good record in them. This is it.

Your feedback for Brothers And Sisters