Eat A Peach (studio album) by The Allman Brothers Band 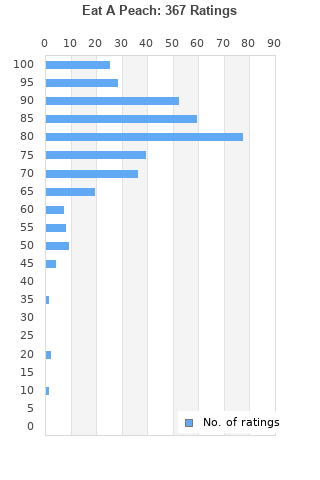 Allman brothers play eat a peach live from XM studios A must have for ABB fans !
Condition: Like New
$20.00

Eat A Peach is ranked 2nd best out of 51 albums by The Allman Brothers Band on BestEverAlbums.com.

The best album by The Allman Brothers Band is At Fillmore East which is ranked number 395 in the list of all-time albums with a total rank score of 4,806.

Friends of the Brothers: A Celebration of the Allman Brothers
Daryl's House, Pawling, United States. 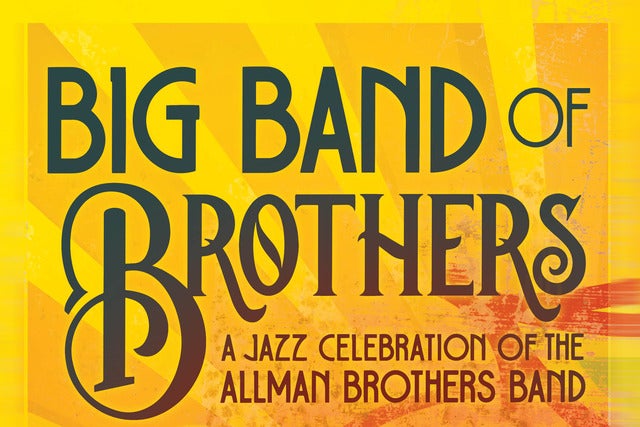 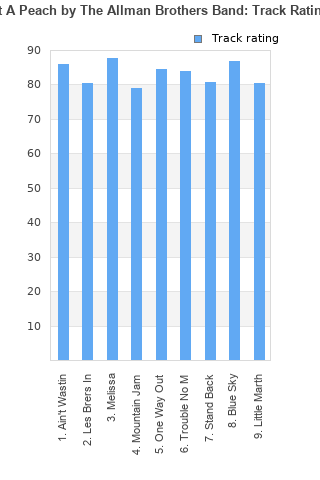 Rating metrics: Outliers can be removed when calculating a mean average to dampen the effects of ratings outside the normal distribution. This figure is provided as the trimmed mean. A high standard deviation can be legitimate, but can sometimes indicate 'gaming' is occurring. Consider a simplified example* of an item receiving ratings of 100, 50, & 0. The mean average rating would be 50. However, ratings of 55, 50 & 45 could also result in the same average. The second average might be more trusted because there is more consensus around a particular rating (a lower deviation).
(*In practice, some albums can have several thousand ratings)
This album is rated in the top 2% of all albums on BestEverAlbums.com. This album has a Bayesian average rating of 80.6/100, a mean average of 80.1/100, and a trimmed mean (excluding outliers) of 80.8/100. The standard deviation for this album is 13.3.

Eat a Peach is one of the key albums from my college years, as it was a ubiquitous presence in the fraternity house where I lived for most of my senior year. Other seventies jam bands feature prominently in my memory from that period, but for me the Allman Brothers are probably the outfit that's had the greatest staying power. Unlike the Grateful Dead, they had a singer (Gregg Allman) who could actually sing, and their extended jams, while long, rarely drift off into complete obscurity. "Blue Sky," with its instantly recognizable guitar riff, is one of the great sunny-day summertime songs of all time.

Eat a Peach is a very good album. The performances on songs like Mountain Jam are still fresh and fun, and the songwriting on the rest hold up very nicely. Melissa, Blue Sky, and the aforementioned Mountain Jam are career highlights.

On a side note, I can't imagine trying to record the rest of an album after losing someone the way they lost Duane Allman. That must have sucked.

Whilst there are some decent tracks on here, I'm not generally a fan of double albums or the mixed studio/live format. Consequently too many tracks drag on too long for me to really enjoy the album as a whole. Having said that, I can see why big fans of the band would rate this highly.

I like this album especially for the Cover. One of the best album covers and the music is also good. You can hear that the band is mourning about the death of their famous front man. But here comes the good music of the whole band you give you a time to enjoy.

A bit overlong to be honest with a few pointless and boring instrumentals(which also appear on the 2CD version of the Fillmore east album and work so much better in that context). A single album would have made a much tighter and more enjoyable listening experience. Still, half of it is brilliant.

I've never been high on albums that mix live music with studio music, but this one did it rather well. The only thing I don't like about the album is Mountain Jam. Were I a DJ on the radio, I'd love it, as I could put it on and go eat lunch, but to listen to all 33 minutes is difficult to say the least. Still a great album.

I understand they wanted to pay tribute to Duane after his untimely death, but the 30 plus minute Mountain Jam is difficult for most to listen through. It probably would have been a better album without that track. The rest of the tracks however are all great so it's still a pretty good album.

Your feedback for Eat A Peach