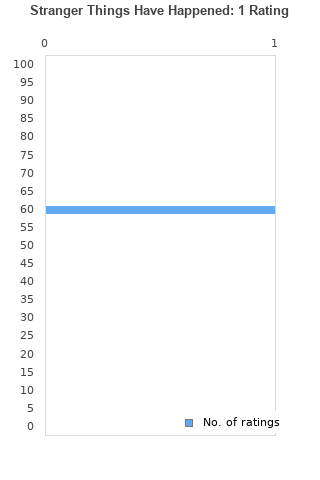 Peter Tork - Stranger Things Have Happened CD Bonus Tracks NEW
Condition: Brand New
Time left: 8d 8h 15m 9s
Ships to: Worldwide
$19.99
Go to store
Product prices and availability are accurate as of the date indicated and are subject to change. Any price and availability information displayed on the linked website at the time of purchase will apply to the purchase of this product.  See full search results on eBay

No tracks have been rated on this album yet.
#
Track
Rating/Comments
1.
Stranger Things Have Happened
Rating: Not enough dataComments:

0
2.
Get What You Pay For
Rating: Not enough dataComments:

0
9.
Gettin' In
Rating: Not enough dataComments:

0
10.
Tender Is
Rating: Not enough dataComments:

Peter Tork was the first to leave The Monkees, at the end of 1968, but didn't release a solo record until this. It is a bright and cheerful record, but not exactly groundbreaking. Best songs are remakes of the Monkees' "Take A Giant Step" and the Jackie Wilson hot "Your Love Keeps Lifting Me Higher".

Your feedback for Stranger Things Have Happened