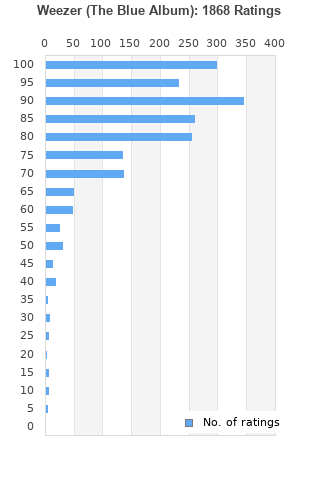 Weezer (The Blue Album) is ranked as the best album by Weezer. 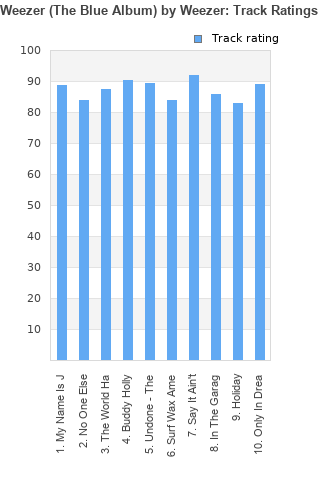 Rating metrics: Outliers can be removed when calculating a mean average to dampen the effects of ratings outside the normal distribution. This figure is provided as the trimmed mean. A high standard deviation can be legitimate, but can sometimes indicate 'gaming' is occurring. Consider a simplified example* of an item receiving ratings of 100, 50, & 0. The mean average rating would be 50. However, ratings of 55, 50 & 45 could also result in the same average. The second average might be more trusted because there is more consensus around a particular rating (a lower deviation).
(*In practice, some albums can have several thousand ratings)
This album is rated in the top 1% of all albums on BestEverAlbums.com. This album has a Bayesian average rating of 84.2/100, a mean average of 83.2/100, and a trimmed mean (excluding outliers) of 84.2/100. The standard deviation for this album is 15.4.

If you like guitars and songs with fun lyrics and catchy riffs this is probably your album. Fun to listen to and fresh still after all these years. People who were young in 1993 also loved this. I hear this now as a quite old guy but I can still root for this thing.

I don't think this album is as good as it is heralded to be and I think it does get over rated quite a bit in terms of its quality. Despite this, the album is 40 minutes of pure energy and enjoyment. Every song has a great hook and quite easily will get lodged in your head for a few days. The peak of this for me is Buddy Holly which I am pretty sure I was singing for about a month before it eventually went out of my head until the next time I revisit this record and then it is back. The choruses are extremely well written and that is what causes this infectious effect. Also, I am a huge fan of the fuzzy sound of the guitars as it makes this record unique and stand out. The energy and frantic nature also makes for a great experience as you never really get bored while listening to this release which is mainly due to the drums. However, there are a few filler tracks and it can be a little simple at times and I would quite like a bit more expansion on certain songs. Overall, this isn't the greatest album of all time but it is extremely fun and so I can see why it gets so much praise and acclaim.

This one is personal.

When this album came out, I was in high school. I was also a drummer with youthful aspirations of rock stardom, convinced that my mediocre garage band would someday emerge as legends.

Didn’t happen, but this record taught me two things. First, a band doesn’t have to play complex stuff to make good music. In this way, the opening drum fill to “Undone” was far more meaningful and influential (to me) than one would think. Second, it’s OK for a songwriter to write and sing the quiet parts out loud. “I want a girl who will laugh for no one else.” Or “In the garage, I feel safe. No one cares about my ways.”

Geeky? Sure. But I had never heard anything like it and it forever changed the way I thought about music.

Good album that doesn't take itself too serious.

How is this album so fun? If you haven't listened to this one yet, please do!

My favorite Alternative Album. Song after song of quirky guitar-driven pop-rock music. Just wonderful. I feel like I have come to appreciate it even more as the years progress. Thank you Rivers Cuomo for hanging out in your bedroom listening to Kiss and playing D and D. Your sacrifice was the world's gain.

A destacar Say it Ain't so, Only in dreams, My Name is Jonas, Undone,...

Just a charming album, most of this songs will stay in your head for months

Its charm is undeniable, but I've always been more into Pinkerton.

Not an across-the-board classic, but many great songs.

Your feedback for Weezer (The Blue Album)