Ready To Die (studio album) by The Notorious B.I.G. 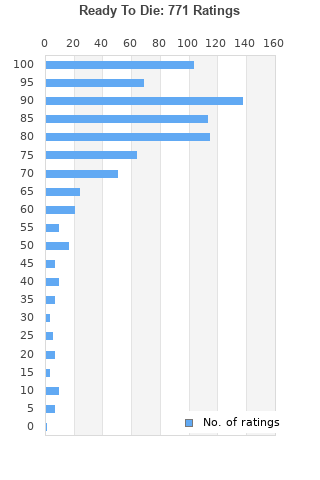 The Notorious B.I.G. Ready To Die Vinyl 2 LP Record SEALED 1995 Limited Edition
Condition: New
Time left: 6h 27m 32s
Ships to: Worldwide
$449.99
Go to store
Product prices and availability are accurate as of the date indicated and are subject to change. Any price and availability information displayed on the linked website at the time of purchase will apply to the purchase of this product.  See full search results on eBay

Ready To Die is ranked as the best album by The Notorious B.I.G.. 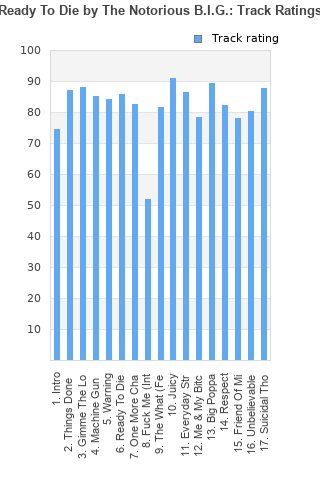 Rating metrics: Outliers can be removed when calculating a mean average to dampen the effects of ratings outside the normal distribution. This figure is provided as the trimmed mean. A high standard deviation can be legitimate, but can sometimes indicate 'gaming' is occurring. Consider a simplified example* of an item receiving ratings of 100, 50, & 0. The mean average rating would be 50. However, ratings of 55, 50 & 45 could also result in the same average. The second average might be more trusted because there is more consensus around a particular rating (a lower deviation).
(*In practice, some albums can have several thousand ratings)
This album is rated in the top 1% of all albums on BestEverAlbums.com. This album has a Bayesian average rating of 81.6/100, a mean average of 79.3/100, and a trimmed mean (excluding outliers) of 81.7/100. The standard deviation for this album is 19.5.

Great album, but there are a few misses

Classic record!! A bit over-rated if you ask me but a very good album nonetheless.

Like many highly regarded hip-hop album, it's too long.

Classical hip hop album. This is one of the best works form BIG, i like most of the songs. The part with the slurp is not so good but it belongs to this album otherwise it were not so good. Sucidal Thoughts have a dark atmospehre and that give a really a strange feeling. But overall a great album don´t feel bad that i bought it i feel good that i have this music album.

In your life there are artists that really mark you. This is the case of Biggie, it is certainly one of my favorite 5 rappers of all time. Christopher Wallace, known as Biggie, is an incredible charismatic rapper, a former Brooklyn street dealer, of which I am absolutely a fan. In 1994 he released his first album "Ready to Die". And what else to say about this album except that it is for me one of the best rap record I have ever listened to (and yet I listened to a lot of hip-hop). In this record, he describes his life as a dealer by posing his incredible and atypical flow on extremely effective prods signed Puff Daddy (based mainly on good big samples). This album is also important because it takes position in the famous conflict (which it will cause his death) between the west coast and the east coast. Finally, the name of the 14th track of this album is enough to describe what I feel: "RESPECT".

Almost flawless. I'd scrap Friend of Mine. Me & My Bitch and Respect are somewhat enjoyable, but I could leave them too.

Although I like Jay-Z's Blueprint a little more, this album, with its mix of street tales and concept songs and radio hits, actually laid the blueprint for East Coast mainstream rap.

This album is a bit long (not a bad thing at all, trust me), but it is still a very worthwhile listen. Biggie was a talent who didn't deserve what happened to him. This album makes me wonder...

There was a time I HATED this album, boy was I wrong. This is a masterpiece possibly the greatest album in the history of rap music. No Body i mean NOBODY flows like Biggie.

Not much to say. An absolute hip hop classic. Not even going to bother listing my favorite tracks because there are so many.

Your feedback for Ready To Die