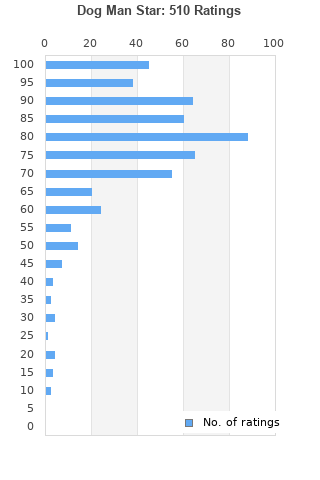 Dog Man Star is ranked as the best album by Suede. 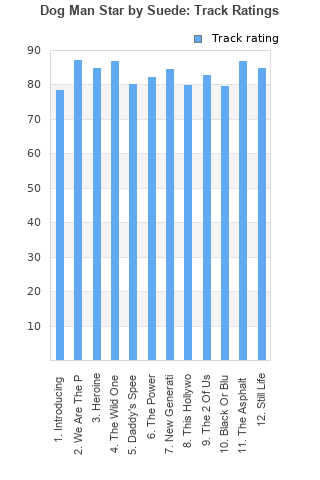 Rating metrics: Outliers can be removed when calculating a mean average to dampen the effects of ratings outside the normal distribution. This figure is provided as the trimmed mean. A high standard deviation can be legitimate, but can sometimes indicate 'gaming' is occurring. Consider a simplified example* of an item receiving ratings of 100, 50, & 0. The mean average rating would be 50. However, ratings of 55, 50 & 45 could also result in the same average. The second average might be more trusted because there is more consensus around a particular rating (a lower deviation).
(*In practice, some albums can have several thousand ratings)
This album is rated in the top 3% of all albums on BestEverAlbums.com. This album has a Bayesian average rating of 78.6/100, a mean average of 77.5/100, and a trimmed mean (excluding outliers) of 78.7/100. The standard deviation for this album is 16.7.

Not so sure about this album prefer coming up myself. Still a good album though.

This is the hugely anticipated Suede second album, and, as with the debut, on release I was disappointed. Clearly rather Bowie influenced (and sometimes copies Bowie a little too closely), and rather over-blown - leaving behind much of the sharpness and audacity of the early singles, it is still a very rich, bold, and enjoyable album. Very glam, yet also highly serious. Away from the emotions of the time, I can appreciate it rather more these days. However, the best work of the band was done in those stunning first three singles in 1992

Suede's moment of brilliance amid apparent chaos in the band. The Asphalt World is one of the great works in modern music. This is the sound of 1994.

Sometimes tension in the studio can remarkably create classic albums , The Beatles 'White Album' and Fleetwood Mac's 'Rumours' are cases in point. You can also add Sued's 'Dog Man Star' to that list

Rehearsals for 'Dog Man Star' were very tense and would split the band into two separate camps. Bernard Butler had his own agenda (an example of which was a 25 minute version of "Asphalt World" which included an 8 minute guitar solo) and frequently clashed with the rest of the band and producer Ed Buller eventually leaving the sessions with the album far from completion . That the album was not only completed but is so darn good is mind blowing

Personally I prefer the cock sure swagger of their debut but 'D.M.S' is close behind with its glam rock , Bowie influenced grandness . It's not quite a masterpiece due to the weaker tracks "Daddy's Speeding" and "Black or Blue" but it sits comfortably as one of the 1990's best albums

To me by far the best Britpop record

One of the best!

"Still Life" is such an epic song and it's really sad that the rest of the album does not play on the same high level. The album is full of promises but most songs sound more like early demos than finalized tracks. And the audio quality is not very good. I prefer the "Dog Man Star 20th Anniversary Live" album because the Royal Albert Hall performance is much better than the original album recording (album rating: 47,08 %)

The ambitious follow up to their debut album, dog man star, is Suede's greatest record. Great songs, especially, the wild ones, and, we are the pigs, but there are other gems here in, daddy's speeding, the asphalt world, and the orchestral closing track, still life. Suede, and in particular Brett Anderson captures that feeling of being young and being an outsider in a big city, great British music.

I prefer the debut but I really strong album anyway.

Your feedback for Dog Man Star