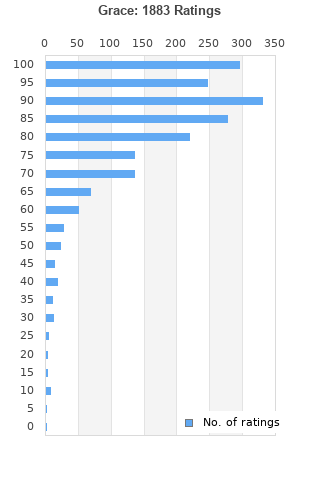 Grace is ranked as the best album by Jeff Buckley. 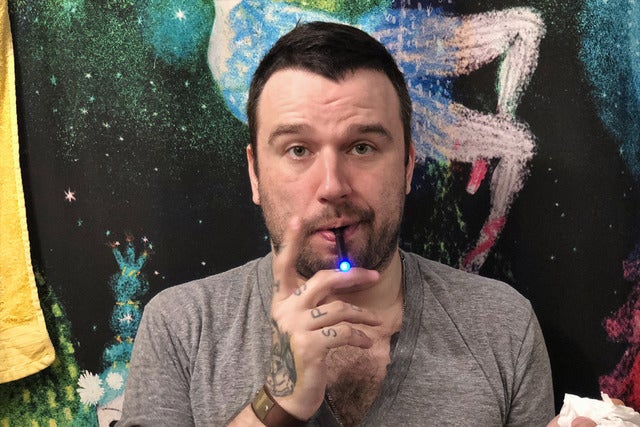 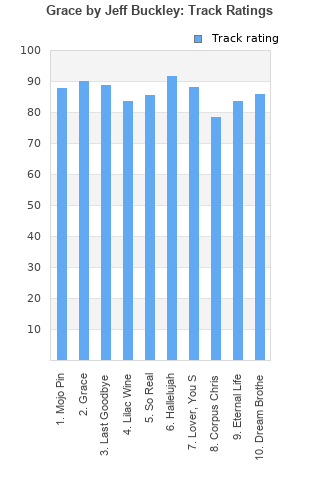 Rating metrics: Outliers can be removed when calculating a mean average to dampen the effects of ratings outside the normal distribution. This figure is provided as the trimmed mean. A high standard deviation can be legitimate, but can sometimes indicate 'gaming' is occurring. Consider a simplified example* of an item receiving ratings of 100, 50, & 0. The mean average rating would be 50. However, ratings of 55, 50 & 45 could also result in the same average. The second average might be more trusted because there is more consensus around a particular rating (a lower deviation).
(*In practice, some albums can have several thousand ratings)
This album is rated in the top 1% of all albums on BestEverAlbums.com. This album has a Bayesian average rating of 83.7/100, a mean average of 82.7/100, and a trimmed mean (excluding outliers) of 83.8/100. The standard deviation for this album is 16.0.

Undeniably one of the best of all time 9/10

Stunning. Stark. Heartbreaking. It is unbelievable that Grace is a debut album as Buckley sounds so mature and cultured as if he had been around for decades plying his trade. The album takes huge risks too and they always pay off. One of the greatest.

A beautiful album but some of the songs have some compositions choices that are not my favorite style choices, sudden changes in volume and tone. Buckley's voice is fantastic but in some songs the vocal acrobatics are a bit baffling and almost go over the top. The album also is not totally consistent in mood (eg Eternal Life is a song like from a different album)

As everyone, I LOVE the vocal performance on this album...but the musical decisions are jarring. Just when I'm in a blissful state listening to this angel sing, along comes this clamorous music and, I hate to say, ruins the song. Only a few exceptions to this. Yet my rating is still a 85/100 because of that amazing vocal performance.

Jeff Buckley is IMO the greatest vocalist ever in popular music, even beating out Freddie. We only got one studio album from him, but his influence is everywhere in Radiohead and Muse. His legacy lives on.

A decent alt rock outing that has been propelled to fame by one single. Hallelujah is incredible.

Last Goodbye is an incredible song, the cover of Hallelujah is superb. The rest of the album is enjoyable but unspectacular. The guy's voice is amazing, it's such a shame we never got any more studio albums from him.

Hauntingly beautiful. The vocals are pitch perfect, with huge range both in tone and in power.

The music pulls from many styles (jazz, rock, orchestral) and it works in a way that’s honestly surprising.

It’s tragic that we didn’t get more from Buckley and criminal that this album isn’t better known.

This is in my all-time top 5, and is just one of the greatest physical representation of pain that exists. The musicality and emotion is insane, so much so that you may have to take a walk after a full listen.

Bare a few tracks this album is near on perfection and even those weaker tracks are still amazing. To begin with there is the vocal performance which is so delicate and beautiful yet also harsh and sharp when it needs to be. The control over his vocal that Buckley shows on this record is nothing short of astounding and it amazes me with every listen. We all know how good the vocal is though but what doesn't get the attention it deserves is the music itself with the instrumentation being truly stunning. The acoustic guitar is like a voice of its own on this album and you can hear it speaking to you directly on every track. Then there is the drum work which leaves me speechless. Overall, I cannot praise this album enough as it is truly phenomenal.

Your feedback for Grace