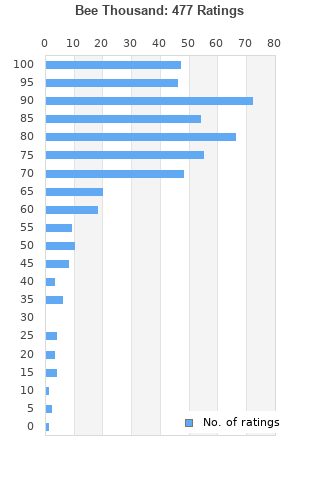 Bee Thousand is ranked as the best album by Guided By Voices. 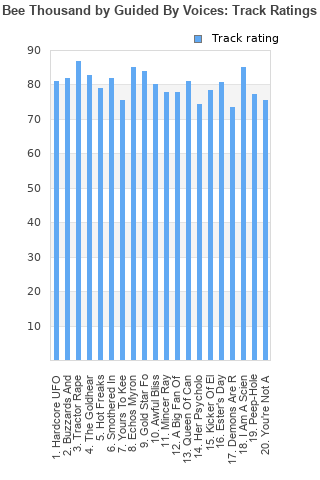 Rating metrics: Outliers can be removed when calculating a mean average to dampen the effects of ratings outside the normal distribution. This figure is provided as the trimmed mean. A high standard deviation can be legitimate, but can sometimes indicate 'gaming' is occurring. Consider a simplified example* of an item receiving ratings of 100, 50, & 0. The mean average rating would be 50. However, ratings of 55, 50 & 45 could also result in the same average. The second average might be more trusted because there is more consensus around a particular rating (a lower deviation).
(*In practice, some albums can have several thousand ratings)
This album is rated in the top 2% of all albums on BestEverAlbums.com. This album has a Bayesian average rating of 79.5/100, a mean average of 78.1/100, and a trimmed mean (excluding outliers) of 79.7/100. The standard deviation for this album is 18.3.

This album has a very rough and raw feel to it which is very unique compared to the smooth nature of most albums now. This makes for an entertaining listen as it feels more personal and like pure music rather than being over refined. The album is made up of short cuts that are very consistent in style and in quality. While there are a few that are a little weaker, most of the tracks are quite good with their being some standouts as well. Also, it is a very good length with there being no real time for us to get bored or lose focus in the music. However, one criticism which is also a strength is the raw production because in places it sounds too rough and could really do with some cleaning up to maintain the sonic quality. Overall, this is a bitesize album with short songs that really pack a punch in its brief listening time.

The ultimate low-fi indie rock album. When I first heard this album, it was shocking. It felt this album was made for me. Short poppy songs with serious classic rock influences clearly influenced by the American Midwest (Great Lakes edition). GbV does have a quality control issue at times (far too many albums that are just ho-hum), but this album is everything that is great about Bob Pollard and gang.

'Bee Thousand' (the title is nothing more than random words arising from a band brain storming session) is GBV's 7th album release , so the old adage they took 12 years to be an over night success is never truer than here

If you think this album has a real unpolished home made feel to it you'd be 100% correct as the entire album was recorded on four track machines and other primitive home recording devices in the garages and basements of band members , and many of the demo takes of the songs were the ones that were used for the released album

TBH this album is good but no better or worse than any number of albums within the gigantic GBV catalogue , just wondering why this one is considered THE one & so highly rated above others?

This is the best audio recording ever in the history of recorded music.

@sethmadsen lol. Drunk people on bandcamp are better than drunk people on soundcloud. But no one is as perfectly artfuly weird as this album.

Fantastic, though falters a little in the middle from Mincer Ray to Her Psychology Today. It's an album full of original, abstract, short lo-fi pieces that will make you want to hit replay over and over again.

Love the comment about the artists sketch book. The aesthetic experience of GBV is so different in this respect that I found it difficult to get into for the longest time. Gave a couple listens a few years ago then put it aside. Recently listened to Alien Lanes and it just clicked!

This album reminds me of the end of Abbey Road (my favorite part of any Beatles album), where there are a bunch of short, unfinished but catchy songs that flow into each other, only Bee Thousand is a whole album built upon that idea. Definitely one of my favorite albums ever.

I want to see them play this whole album live, from start to finish. How awesome would that be? This might be my favorite BEA find ever. Like so many great albums, some people get it, others don't. I get this one and not some others that you get.

Your feedback for Bee Thousand