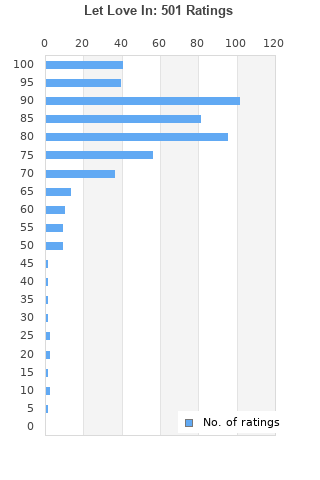 Let Love In is ranked 3rd best out of 27 albums by Nick Cave & The Bad Seeds on BestEverAlbums.com. 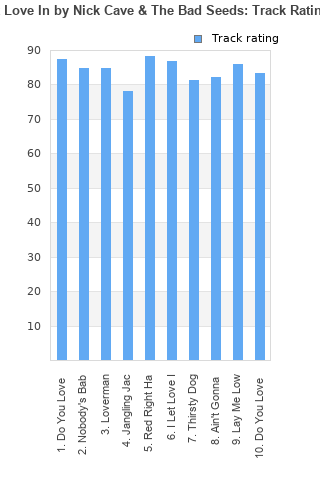 Rating metrics: Outliers can be removed when calculating a mean average to dampen the effects of ratings outside the normal distribution. This figure is provided as the trimmed mean. A high standard deviation can be legitimate, but can sometimes indicate 'gaming' is occurring. Consider a simplified example* of an item receiving ratings of 100, 50, & 0. The mean average rating would be 50. However, ratings of 55, 50 & 45 could also result in the same average. The second average might be more trusted because there is more consensus around a particular rating (a lower deviation).
(*In practice, some albums can have several thousand ratings)
This album is rated in the top 1% of all albums on BestEverAlbums.com. This album has a Bayesian average rating of 82.1/100, a mean average of 81.0/100, and a trimmed mean (excluding outliers) of 82.3/100. The standard deviation for this album is 14.5.

This is everything that you'd expect from Nick Cave. It is the epitome of his work. My personal favorite of all his studio albums. Every song a gem

Darn it the previous post is a complete mike drop . . . I have nothing more to add to the perfect encapsulation of not only this album (Nick Cave and the Bad Seeds album number 8) but Caves entire career

But I will add this is my favourite NCATBS album as we get a little bit of everything here representing early Birthday Party-esque material, some ‘Boatmans Call’ , some ‘Murder Ballads’ and even ‘Skeleton Tree’

Wondering where to begin with Nick Caves huge catalogue? Start right here and depending on which parts you prefer go forward or back to discover more

I've known about Nick Cave for a long time, and didn't think too much about him until I saw an essay he wrote about the role of duende in rock music. He writes, "All love songs must contain duende. For the love song is never truly happy. It must first embrace the potential for pain. Those songs that speak of love without having within in their lines an ache or a sigh are not love songs at all but rather Hate Songs disguised as love songs, and are not to be trusted. These songs deny us our humanness and our God-given right to be sad and the air-waves are littered with them. The love song must resonate with the susurration of sorrow, the tintinnabulation of grief. The writer who refuses to explore the darker regions of the heart will never be able to write convincingly about the wonder, the magic and the joy of love for just as goodness cannot be trusted unless it has breathed the same air as evil – the enduring metaphor of Christ crucified between two criminals comes to mind here – so within the fabric of the love song, within its melody, its lyric, one must sense an acknowledgement of its capacity for suffering." Damn if that isn't a perfect encapsulation of what makes Let Love In such a great album: the spaces in between that allow the darkness to intertwine with the beauty of loving another person. Cave has been a great artist for a very long time, but Let Love In is the most fully realized vision of his brooding rock and roll career.

Nick Cave has this thing that really drives me in his music, i guess is his darkness, his voice, i don't know, It just ethereal, almost divine.

Has some great tracks, but also some of Cave's signature weirdness. Overall, a good album

This album freaks me out, guys. This thing is hellish and disturbing. It's a classic.

Can't help but feel this is hugely underrated. One of Cave's best album which contains all of the elements that make him great.

Your feedback for Let Love In