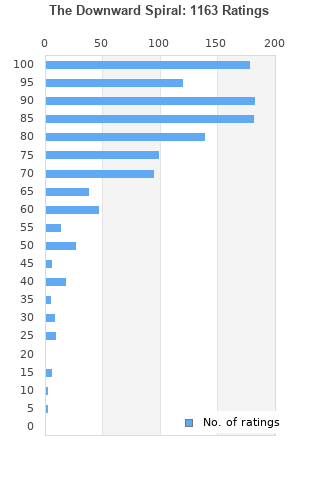 The Downward Spiral is ranked as the best album by Nine Inch Nails. 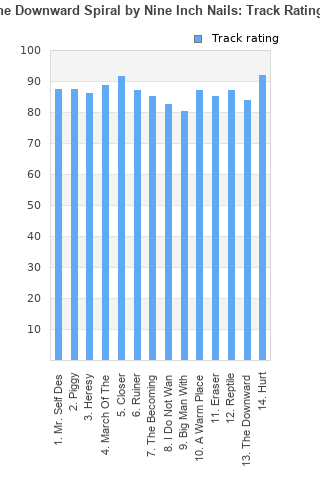 Rating metrics: Outliers can be removed when calculating a mean average to dampen the effects of ratings outside the normal distribution. This figure is provided as the trimmed mean. A high standard deviation can be legitimate, but can sometimes indicate 'gaming' is occurring. Consider a simplified example* of an item receiving ratings of 100, 50, & 0. The mean average rating would be 50. However, ratings of 55, 50 & 45 could also result in the same average. The second average might be more trusted because there is more consensus around a particular rating (a lower deviation).
(*In practice, some albums can have several thousand ratings)
This album is rated in the top 1% of all albums on BestEverAlbums.com. This album has a Bayesian average rating of 82.6/100, a mean average of 81.4/100, and a trimmed mean (excluding outliers) of 82.7/100. The standard deviation for this album is 16.5.

Beyond the border of my musical taste. I can live without this..

I like the music very much the first song is not so good but that is Industrial. I understand the Story of The Downward Spiral. It is the way of how a person goes to the bottom of life. And I can say I like Close and Hurt very much March of the Pigs and A Warm Place are also nice tracks.

Some parts of it are too dark for me, but then there are other parts where I think it's some of the most clever moments ever committed to tape. Best songs are Mr. Self Destruct, Piggy, March of the pigs, Closer, the Becoming, Eraser, Reptile.

very good album, not accessible in the slightest. It took me 30 times trying to listen to finally get all the way through. But when I finally finished it, My jaw was dropped to the floor and I oddly became much happier.

I believe this album to have some of the best production I've ever heard. Most albums being released now dont hold a candle to the mixing and mastering of this. Closer I feel to be a true ten out of ten song. This album is what it says on the tin. An album getting more and more bleak as it goes on. I think the song (downward spiral) Is a very smart choice, to have a load of different elements of songs come together creating this narrative of the protagonist being overwhelmed by everything hes gone through. This album I think will forever be great as it is really the pinnacle of industrial music and certainly one of the best album narratives ever.

thanks for the nightmares trent.

Your feedback for The Downward Spiral