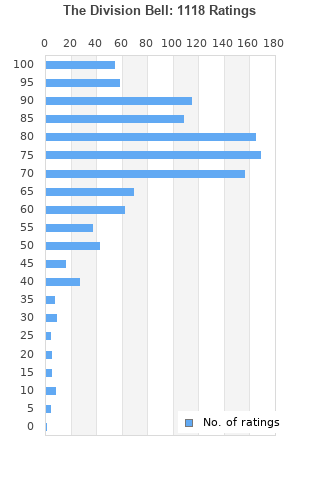 The Division Bell is ranked 7th best out of 36 albums by Pink Floyd on BestEverAlbums.com.

The best album by Pink Floyd is The Dark Side Of The Moon which is ranked number 2 in the list of all-time albums with a total rank score of 81,480. 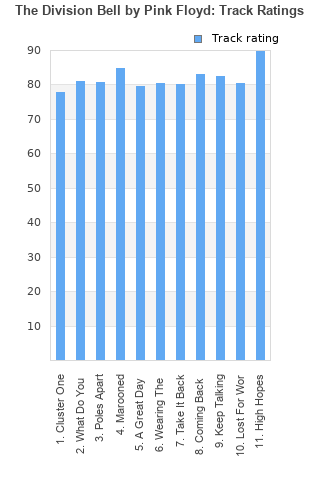 Rating metrics: Outliers can be removed when calculating a mean average to dampen the effects of ratings outside the normal distribution. This figure is provided as the trimmed mean. A high standard deviation can be legitimate, but can sometimes indicate 'gaming' is occurring. Consider a simplified example* of an item receiving ratings of 100, 50, & 0. The mean average rating would be 50. However, ratings of 55, 50 & 45 could also result in the same average. The second average might be more trusted because there is more consensus around a particular rating (a lower deviation).
(*In practice, some albums can have several thousand ratings)
This album is rated in the top 17% of all albums on BestEverAlbums.com. This album has a Bayesian average rating of 74.6/100, a mean average of 73.4/100, and a trimmed mean (excluding outliers) of 74.6/100. The standard deviation for this album is 17.4.

I think this album is underrated because of the absence of Roger Waters. It's not quite as good as the albums from the 70s but it comes close in a couple ways. Give it a listen and decide for yourself!

Pretty moody and mellow. The guitar work is spectacular. Seemingly many snide allusions to departed member Roger Waters casts a cynical, downbeat tone to the lyrics.

There's no denying that this doesn't sound as much like vintage Pink Floyd as a David Gilmour solo record. That's not to detract from Richard Wright and Nick Mason's performances, it's just that Gilmour's prints are all over this. That's not necessarily a bad thing, however, and The Division Bell stands out as one of Pink Floyd's most convincing records. There's ambience (Cluster One and Marooned), the classic Floyd sound (What Do You Want From Me) and a soaring epic (High Hopes), all alongside some great guitar work and powerful vocals. This will never be Pink Floyd's most well-regarded album but if you can listen openly, you might just like what you hear.

Even though Roger Waters wasn't part of this, the album, as a whole, is up there in the top tier of best Pink Floyd music. There are many good songs on it, but "Coming Back To Life" is a perfect creation.

A rare album where the second half is better than the first half. The album is a little bit too long, there are a few 6-minute duds. High Hopes is a great closer and the best song on the album. Also like Take It Back and Wearing the Inside Out.

One of my personal underrated PF albums. Even though this is post Roger Waters era, I find the instrumentals make up for the lack of vocals. Gilmore proves on this album why he is one of the best guitarists of the last century, even without water. The album was just very peaceful to listen to, and in my opinion their most brilliant album since the wall. TDB was able to show the new found creativity that Gilmore and Wright were able show being in control without waters.

Decent album, me being born in 1980, it's a bit hard to be objective. So I heard "Learning to Fly" when it came on radio in '87(and without any help, I gathered that "Pink Floyd" wasn't the name of the lead singer or guitarist) and around the same time heard "Brick II" for the first time and was like "How can that be Pink Floyd too? They sound nothing alike". Interestingly I also heard Roger Waters' "The Tide is Turning" when it came out. But for a long time Pink Floyd was to me just a name, but a name more weighty than probably any other rock name(if you list Beatles, Stones etc. separately as pop). When I started taking more of an interest in band membership and history I realized that Roger Waters had previously been a member of Floyd and that almost all of The Wall had been written by him hence the major difference I saw between "Brick II" and "Learning to Fly".

I began listening to Floyd albums buying Division Bell(tape) and Momentary Lapse(CD) cheaply around the same time, late '01-'02. I had just started exploring classic rock and was interested in exploring Floyd next, but regarded "Learning to Fly" as "my Floyd" more so than The Wall or Dark Side of the Moon which were before my time. So I didn't think either album was great, but I guess it was the Pink Floyd name that kept me listening to them and noting the good things, where I otherwise might not have bothered any more with albums were merely OK or decent.

Gradually I noted that unlike MLOR, DB's composition was almost entirely Gilmour and Wright. I also learned that neither Gilmour nor Wright were confident lyricists while in Floyd with Waters and didn't often contribute to them, hence the help from Anthony Moore, Polly Samson, Nick Laird-Clowes, Phil Manzanera, Patrick Leonard etc. Rick Wright's contributions to writing, playing and singing make DB more of a Floyd album and less of a Gilmour solo regardless of how little it sounds like classic Floyd I suppose.

It's good but definitely not top tier Floyd. I've heard at least two people that said this was their favorite Pink Floyd album, I was confused why but you can like what you want, that's the beauty of music. Nothing Earth shattering but it is nice.

A good album, but the lyrical quality is lessened by a lack of Roger Waters

The comparison to the previous albums by Pink Floyd is rather harsh.
The songwriting is below average (for Pink Floyd standards), but the music is just fine.

Your feedback for The Division Bell