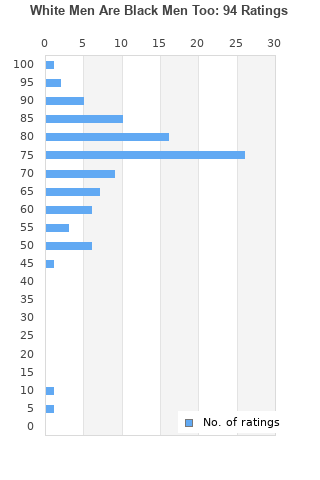 White Men Are Black Men Too is ranked 2nd best out of 6 albums by Young Fathers on BestEverAlbums.com.

The best album by Young Fathers is Cocoa Sugar which is ranked number 3119 in the list of all-time albums with a total rank score of 489.

CIX 2nd WORLD TOUR: Save me, Kill me in Reading
The Santander Arena , Reading, United States.

Listen to White Men Are Black Men Too on YouTube 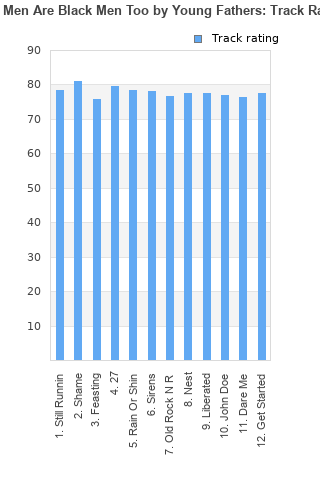 Rating metrics: Outliers can be removed when calculating a mean average to dampen the effects of ratings outside the normal distribution. This figure is provided as the trimmed mean. A high standard deviation can be legitimate, but can sometimes indicate 'gaming' is occurring. Consider a simplified example* of an item receiving ratings of 100, 50, & 0. The mean average rating would be 50. However, ratings of 55, 50 & 45 could also result in the same average. The second average might be more trusted because there is more consensus around a particular rating (a lower deviation).
(*In practice, some albums can have several thousand ratings)
This album has a Bayesian average rating of 73.4/100, a mean average of 72.0/100, and a trimmed mean (excluding outliers) of 73.5/100. The standard deviation for this album is 14.8.

no they're not, shitheads

This is a really fun sounding album that fuzes together many different musical genres including hip-hop, reggae, and pop. As someone already mentioned, it does sound a lot like early TV on the Radio

Less hip hop than their previous albums but the political nature and must listen to aspect is still there. Everything just fits together and nothing seems forced. Really good.

Reminds me of early TVotR... anyone else?

Your feedback for White Men Are Black Men Too