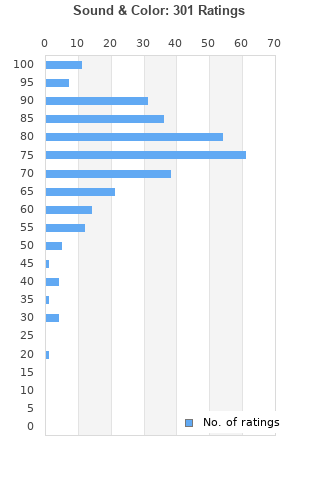 Sound & Color is ranked 2nd best out of 2 albums by Alabama Shakes on BestEverAlbums.com.

The best album by Alabama Shakes is Boys & Girls which is ranked number 1666 in the list of all-time albums with a total rank score of 1,009. 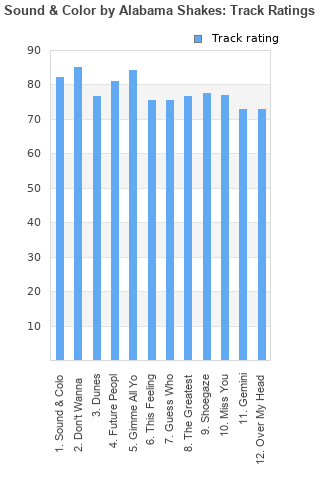 Outliers can be removed when calculating a mean average to dampen the effects of ratings outside the normal distribution. This figure is provided as the trimmed mean. A high standard deviation can be legitimate, but can sometimes indicate 'gaming' is occurring. Consider a simplified example* of an item receiving ratings of 100, 50, & 0. The mean average rating would be 50. However, ratings of 55, 50 & 45 could also result in the same average. The second average might be more trusted because there is more consensus around a particular rating (a lower deviation).
(*In practice, some albums can have several thousand ratings)
This album is rated in the top 9% of albums on BestEverAlbums.com. This album has a mean average rating of 75.0/100. The trimmed mean (excluding outliers) is 75.9/100. The standard deviation for this album is 13.4.

Showing latest 10 comments | Show all 17 comments | Most Helpful First | Newest First
(Only showing comments with -2 votes or higher. You can alter this threshold from your profile page. Manage Profile)

I was really expecting to enjoy this album. Not only that, I really WANTED to love this album! But, no. There's only one problem I have with this album, and it's a biggie: the vocal performance is atrocious. I'm sure to other people it sounds "soulful" or whatever, but to me, it's grating. Like nails on a chalkboard. The music is fine. The instrumentation and melodies are really good, especially for today's culture. Unfortunately, I could not get past the singer's annoying voice.

If you like this album, good for you, I just couldn't stand it.

Alabama Shakes are a powerful and tremendous band.

Upon first listen to this album I was loving some of the tracks (Future People, Don't Wanna Fight No More, Gimme All Your Love). It took a few more listens to start appreciating some of the other songs, but I now like them just as much! The singers powerful voice just oozes soul throughout the entire album!

it's definitely a grower. I'm really starting to enjoy it after a few listens. Unique sound compared to some of the other things being released

Like with most change, it seems that their new direction in sound has had a divided response among people. Personally I think some of the wierdness you hear is a band getting better. I also love that this is one that requires close attention and repeat listening to get the most out of it. 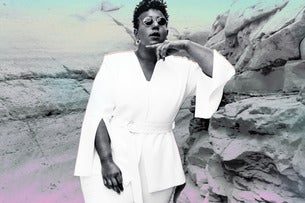 Your feedback for Sound & Color