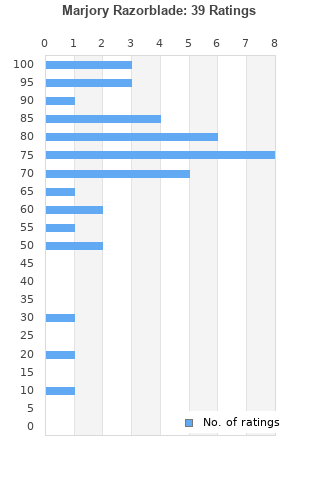 Marjory Razorblade is ranked as the best album by Kevin Coyne. 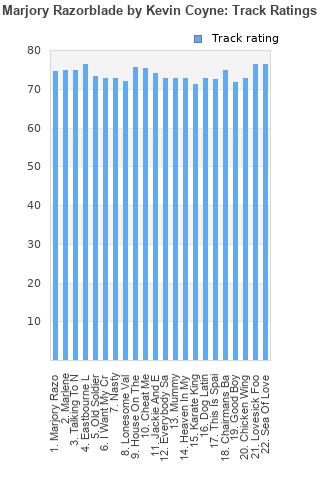 Rating metrics: Outliers can be removed when calculating a mean average to dampen the effects of ratings outside the normal distribution. This figure is provided as the trimmed mean. A high standard deviation can be legitimate, but can sometimes indicate 'gaming' is occurring. Consider a simplified example* of an item receiving ratings of 100, 50, & 0. The mean average rating would be 50. However, ratings of 55, 50 & 45 could also result in the same average. The second average might be more trusted because there is more consensus around a particular rating (a lower deviation).
(*In practice, some albums can have several thousand ratings)
This album is rated in the top 24% of all albums on BestEverAlbums.com. This album has a Bayesian average rating of 74.6/100, a mean average of 75.2/100, and a trimmed mean (excluding outliers) of 75.2/100. The standard deviation for this album is 22.1.

"Marjory Razorblade' is a conscientiously passionate and impetuous work that is one of the all-time masterpieces to have emerged from the UK."
I totally agree. But does that not mean it must get a better ranking?

Kevin Coyne who carved out mythological stories of pathos. His vocal style was a rough kind of grumbling reminiscent of Captain Beefheart and his arrangements were spartan and bizarre. 'Marjory Razorblade' consists of a series of stories of alienation, insanity and alcholism. In the heart of Coyne's music are the blues of the Delta allied to the 'ship of fools' theme common to English literature. 'Marjory Razorblade' is a conscientiously passionate and impetuous work that is one of of the all-time masterpieces to have emerged from the UK.

Your feedback for Marjory Razorblade