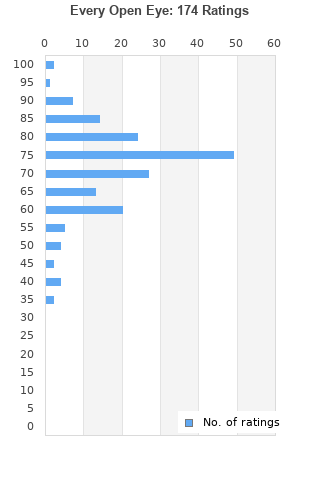 Every Open Eye is ranked 2nd best out of 8 albums by CHVRCHES on BestEverAlbums.com.

The best album by CHVRCHES is The Bones Of What You Believe which is ranked number 1362 in the list of all-time albums with a total rank score of 1,293. 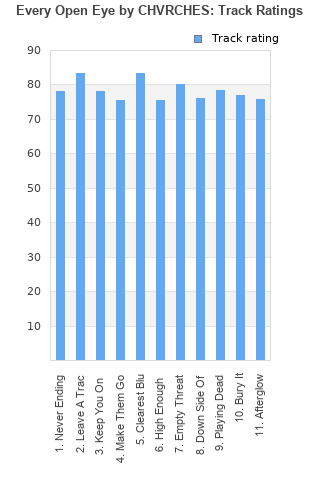 Rating metrics: Outliers can be removed when calculating a mean average to dampen the effects of ratings outside the normal distribution. This figure is provided as the trimmed mean. A high standard deviation can be legitimate, but can sometimes indicate 'gaming' is occurring. Consider a simplified example* of an item receiving ratings of 100, 50, & 0. The mean average rating would be 50. However, ratings of 55, 50 & 45 could also result in the same average. The second average might be more trusted because there is more consensus around a particular rating (a lower deviation).
(*In practice, some albums can have several thousand ratings)
This album has a Bayesian average rating of 72.0/100, a mean average of 71.5/100, and a trimmed mean (excluding outliers) of 71.9/100. The standard deviation for this album is 11.8.

I really enjoyed their first album, but this is just more of the same; just a little less interesting this time.

Blimey I had formed the impression (wrongly) that this lot would be edgy and cool...this is just really bad rehashed 80's synth pop with really bland vocals.

Clearest Blue is one of the standout tracks of 2015.

Every Open Eye is pretty top heavy. 2 really solid single material tunes and then Clearest Blue and Leave A Trace pushing the album past mediocre status but not quite enough to outweigh some of the lesser stuff.

Just another reason to love 2015, really.

Yeah, i mean like its good. I was hoping for something a bit more, but the album just ended being pretty straightforward. Average release.Leave A Trace is an AMAZING track though.

Your feedback for Every Open Eye