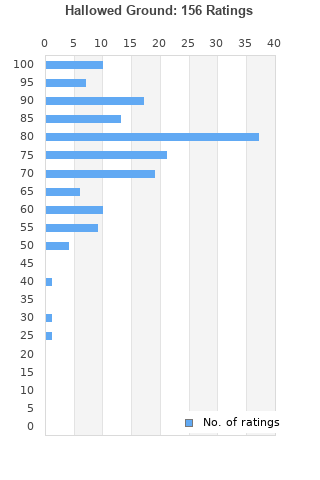 Violent Femmes Hallowed Ground Vinyl Lp Record Slash Records
Condition: Used
Time left: 1d 18h 29m 58s
Ships to: Worldwide
$12.50
Go to store
Product prices and availability are accurate as of the date indicated and are subject to change. Any price and availability information displayed on the linked website at the time of purchase will apply to the purchase of this product.  See full search results on eBay

Hallowed Ground is ranked 2nd best out of 13 albums by Violent Femmes on BestEverAlbums.com. 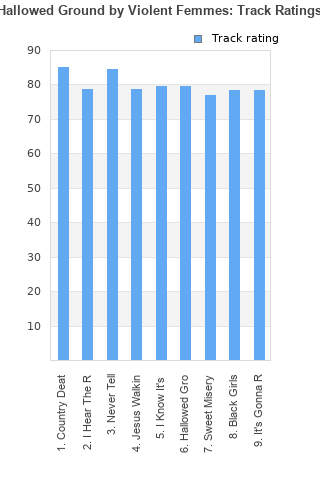 Rating metrics: Outliers can be removed when calculating a mean average to dampen the effects of ratings outside the normal distribution. This figure is provided as the trimmed mean. A high standard deviation can be legitimate, but can sometimes indicate 'gaming' is occurring. Consider a simplified example* of an item receiving ratings of 100, 50, & 0. The mean average rating would be 50. However, ratings of 55, 50 & 45 could also result in the same average. The second average might be more trusted because there is more consensus around a particular rating (a lower deviation).
(*In practice, some albums can have several thousand ratings)
This album is rated in the top 5% of all albums on BestEverAlbums.com. This album has a Bayesian average rating of 77.2/100, a mean average of 76.8/100, and a trimmed mean (excluding outliers) of 77.5/100. The standard deviation for this album is 14.1.

I stood right up in the heart of hell and proclaimed this album a second masterpiece by VF. While some listeners may be turned off by the over religious overtones of some of the songs, I found the music to be eclectic, apoplectic, eccentric, energetic, and affecting. I disagree with previous rater Brad1770 about the quality of "Black Girls", it's one of my favorites. I think musically this a far more diverse than their debut, and it creates an atmosphere ripe for repeated plays and discussions.

'Hallowed Ground' was the first Violent Femmes anything I ever heard , the guy across the street played me "Country Death Song" and it freaked me the fuck out , I found it creepy and scary all in equal measures & it left a lasting negative Violent Femmes impression on me for many years to come

Over all its good but far from great

Undeniably American record, varying in sounds from country to gospel and what sounds like a saxophone grinding through a cajun meat factory. More theatrical delivery than the debut, Gano immerses himself in the emotion surrounding the tales of the characters. Extremely dark opener and the epic Never Tell are the highlights for me, but I get a kick out of the whole thing.

Good album, love the artwork... it's not as good as Blind leading the naked tough. Never tell and couple of other songs are really great.

If it weren't for the last three tracks, slightly worse than the others, this would be one of the best.

Country Death Song is the best song they ever gave a microphone nightmares over. Despite only hearing the two albums there is so much I like about this band.

Some really irritating songs on this album , but it's brilliant

Your feedback for Hallowed Ground