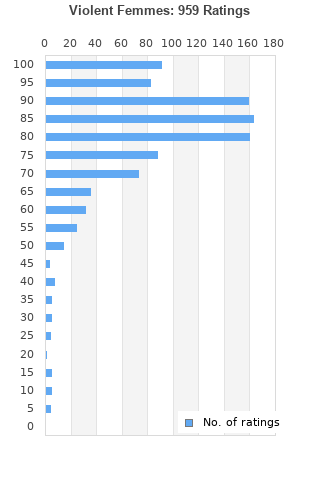 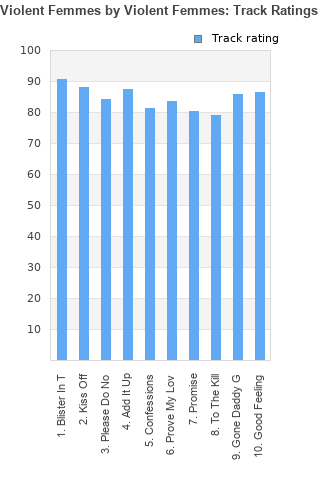 Rating metrics: Outliers can be removed when calculating a mean average to dampen the effects of ratings outside the normal distribution. This figure is provided as the trimmed mean. A high standard deviation can be legitimate, but can sometimes indicate 'gaming' is occurring. Consider a simplified example* of an item receiving ratings of 100, 50, & 0. The mean average rating would be 50. However, ratings of 55, 50 & 45 could also result in the same average. The second average might be more trusted because there is more consensus around a particular rating (a lower deviation).
(*In practice, some albums can have several thousand ratings)
This album is rated in the top 1% of all albums on BestEverAlbums.com. This album has a Bayesian average rating of 81.7/100, a mean average of 80.3/100, and a trimmed mean (excluding outliers) of 81.8/100. The standard deviation for this album is 16.0.

This record is so unique for its time amd so influential for bands like Neutral Milk Hotel that you can't tell it is not important. It captures teen angst and frustrations and mixes it with eccentric vocals and simple instrumentals. Fav tracks: Blister In The Sun, Add It Up, Promise, Gone Daddy Gone.

First time listening to this album. I love it. It’s like punk rock for nerds. Simple music, heartfelt sentiments, passionately played. Bouncy and fun, all while reminding you of what the first dose of heartache feels like.

Blister in the Sun is great, the rest aren't bad at all.

Violent Femmes' self-titled debut album delivers some of the most cathartic teen angst ever put on record ("Blister in the Sun"), along with some genuinely cringeworthy moments ("Gimme the Car"). I'm willing to excuse some of the more juvenile turns of phrase because Gordon Gano and company really do seem to understand rejection and are able to translate what is really a very personal experience into something universal. And back in the eighties when I first loved Violent Femmes, I don't think I fully appreciated their musicianship. But check out bassist Brian Ritchie's work on nearly every song here: his bass playing gives the album its unique musical signature. It's so strange that the band changed direction so abruptly on their next album, Hallowed Ground, since they seemed to have found a winning formula here.

one of the best albums of the 80's

Your feedback for Violent Femmes