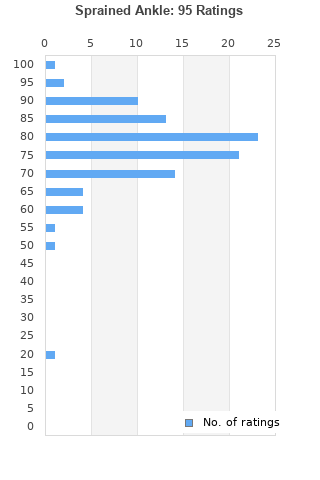 Sprained Ankle is ranked as the best album by Julien Baker. 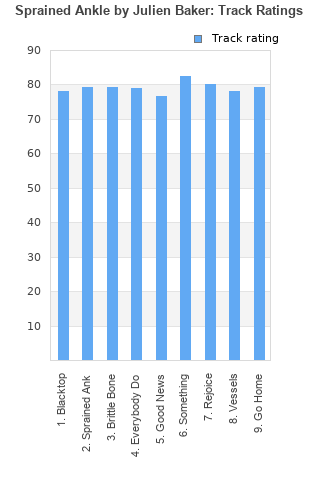 Rating metrics: Outliers can be removed when calculating a mean average to dampen the effects of ratings outside the normal distribution. This figure is provided as the trimmed mean. A high standard deviation can be legitimate, but can sometimes indicate 'gaming' is occurring. Consider a simplified example* of an item receiving ratings of 100, 50, & 0. The mean average rating would be 50. However, ratings of 55, 50 & 45 could also result in the same average. The second average might be more trusted because there is more consensus around a particular rating (a lower deviation).
(*In practice, some albums can have several thousand ratings)
This album is rated in the top 5% of all albums on BestEverAlbums.com. This album has a Bayesian average rating of 77.0/100, a mean average of 76.8/100, and a trimmed mean (excluding outliers) of 77.5/100. The standard deviation for this album is 10.8.

I remember her debut being the talk of the town back in 2015, yet I somehow never got to listen to it – I mean, Folk-based Singer/Songwriter sounds something I’d easily give a pass without a second thought, so it's not that big of a surprise. Better late than never, I had to see what the fuss is about in order to properly evaluate this one. My initial suspicion was both confirmed and refuted. On the one hand, it feels like I’ve heard all about it before, nothing groundbreaking that sets her apart from her peers, at least from a strictly technical point of view. On the other hand, she can really speak to your heart. A deeply personal, honest, courageously confessional accounting of her struggles, sufferings, fears, insecurities, self-diminishing thoughts. She also touches some more abstract matters, like religious themes, but manages to remain relatable by displaying their impact on her private affairs, i.e. addiction or interpersonal relationships. The music takes a back seat, it's secondary to the point of almost being non-existent, it’s there just to further emphasise the message. Sometimes she goes over the top, e.g. Rejoice should in theory be the most powerful moment of the album, but it was simply too much for the light-hearted me. Actually, there’s a line in Brittle Boned that summarises the whole album "Cause I’m so good at hurting myself".

It's not something that I will listen every day, but it is not bad at all. 7/10.

And just when we thought that Carrie and Lowell was the most depressing album of 2015....

An album like this should make me want to tell Julien Baker to get a grip. Instead, I just want to cry with her. She just gets it.

Your feedback for Sprained Ankle