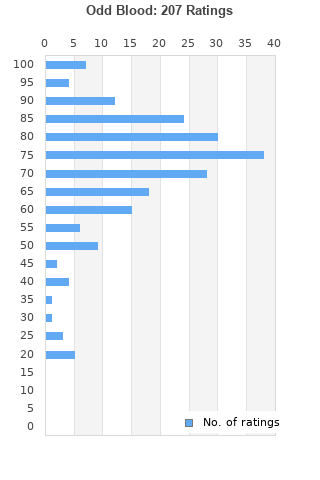 Odd Blood is ranked as the best album by Yeasayer. 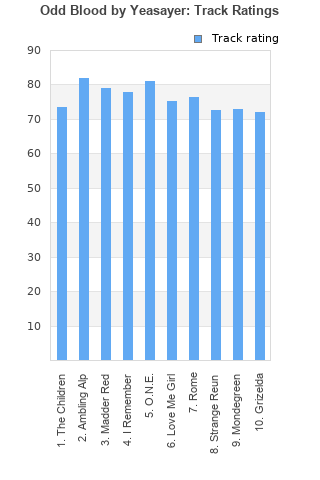 Outliers can be removed when calculating a mean average to dampen the effects of ratings outside the normal distribution. This figure is provided as the trimmed mean. A high standard deviation can be legitimate, but can sometimes indicate 'gaming' is occurring. Consider a simplified example* of an item receiving ratings of 100, 50, & 0. The mean average rating would be 50. However, ratings of 55, 50 & 45 could also result in the same average. The second average might be more trusted because there is more consensus around a particular rating (a lower deviation).
(*In practice, some albums can have several thousand ratings)
This album has a mean average rating of 71.0/100. The trimmed mean (excluding outliers) is 70.7/100. The standard deviation for this album is 16.9.

This is one of the first 'experimental' albums I fully appreciated, so I will forever adore Odd Blood. Even after several years, all of the songs hold up, and the ones I didn't really enjoy have gotten better. One of my most listened to albums

Fantastic glitch pop with some standout world music influences. Rome and Strange Reunions are the standout tracks to me.

Fun summer soundtrack, was great for driving to the beach or the bar in 2010. And then like all candy confections, it dissolved. It was nice while it lasted.

1st half is great

starts out awesome, second half of the album is a disappointment

Too simple and light-hearted to be taken seriously.

This is indie's version of world music, blending middle eastern and african rhythms together inside their version of pop/rock/folk. There's some smatterings of synth pop in there too. All this genre-blending works most of the time, and works especially well on "ambling alp" and "o.n.e."

Your feedback for Odd Blood