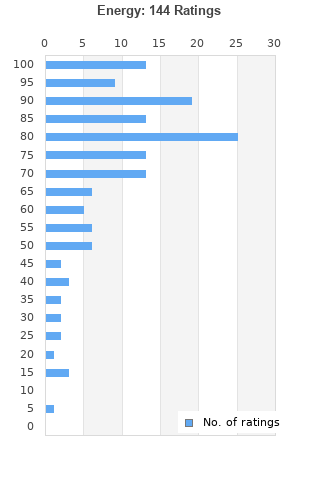 LP OPERATION IVY Energy LOOKOUT010 LOOKOUT UNITED STATES Vinyl
Condition: Used
Time left: 22d 15h 12m 40s
Ships to: Worldwide
$94.23
Go to store
Product prices and availability are accurate as of the date indicated and are subject to change. Any price and availability information displayed on the linked website at the time of purchase will apply to the purchase of this product.  See full search results on eBay

Energy is ranked as the best album by Operation Ivy. 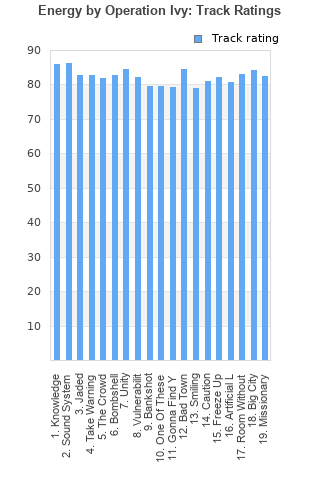 Rating metrics: Outliers can be removed when calculating a mean average to dampen the effects of ratings outside the normal distribution. This figure is provided as the trimmed mean. A high standard deviation can be legitimate, but can sometimes indicate 'gaming' is occurring. Consider a simplified example* of an item receiving ratings of 100, 50, & 0. The mean average rating would be 50. However, ratings of 55, 50 & 45 could also result in the same average. The second average might be more trusted because there is more consensus around a particular rating (a lower deviation).
(*In practice, some albums can have several thousand ratings)
This album has a mean average rating of 74.0/100. The trimmed mean (excluding outliers) is 74.2/100. The standard deviation for this album is 21.1.

The holy grail of 90s third wave ska and also the most successful blend of hardcore and ska. Elegantly written and savagely played.

One of my favorite albums. This was part of the whole punk ska movement. The songs are so fast and catchy. Several members later formed Rancid.

Absolutely essential if you like your loud punk music! Probably as good as the myths you heard about it. If you are in any posistion to get this album, get it. So very hard to find yet so good. Knowledge and Vulnerability are my favorite.

Despite an awfully bad production quality, this 1989 East-Bay album is awesome. It's considered as THE first ska-punk record and I believe it will go down in history as one of the greatest album of the genre. But even if you're not a huge fan of that type of music, you can still enjoy the energy and the enthusiasm that are present in every song. Anyway, this record is among my favorites, and if you like the musical style (and if the sound quality doesn't really matter to you) it should also be among yours too. These guys are real and passionate and you can definitely feel it by listening to the record. It's called Energy, and trust me, it really is.

Your feedback for Energy