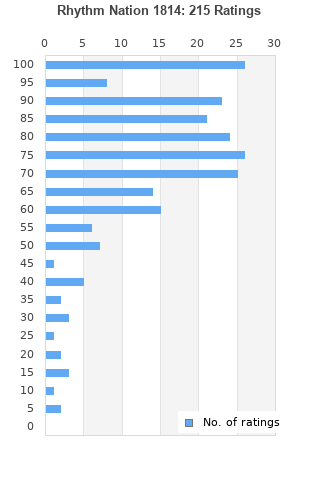 Janet Jackson Rhythm Nation 1814 Album 12" LP A&M Records 1989 SP 3920
Condition: Used
Time left: 1h 26m 24s
Ships to: Worldwide
$12.99
Go to store
Product prices and availability are accurate as of the date indicated and are subject to change. Any price and availability information displayed on the linked website at the time of purchase will apply to the purchase of this product.  See full search results on eBay

Rhythm Nation 1814 is ranked as the best album by Janet Jackson. 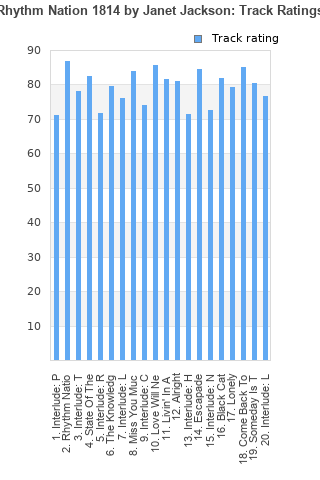 Rating metrics: Outliers can be removed when calculating a mean average to dampen the effects of ratings outside the normal distribution. This figure is provided as the trimmed mean. A high standard deviation can be legitimate, but can sometimes indicate 'gaming' is occurring. Consider a simplified example* of an item receiving ratings of 100, 50, & 0. The mean average rating would be 50. However, ratings of 55, 50 & 45 could also result in the same average. The second average might be more trusted because there is more consensus around a particular rating (a lower deviation).
(*In practice, some albums can have several thousand ratings)
This album has a mean average rating of 73.0/100. The trimmed mean (excluding outliers) is 73.3/100. The standard deviation for this album is 21.0.

This inspired all music by black women in the '90s and its impact is even noticable in the '00s, how does it have a score of 73/100? Maybe because no one here seems to give a shit about cultural impact. Guitar good, drum machine bad.

You thought I was going to say something about sexism or racism? HAHA sucker.

Sexism and racism probably contribute greatly to the lack of recognition for this album too though.

this is easily her best album hands down the only thing I didn't like was the little 30 seconds or so of interruption in between the majority of songs, to me it ruins the flow

I hadn't listened to this album for many years--sounds even better now, never gets old!

A perfect blend of dance, R&B, pop, and social/political statements. Huge impact on music. This album is when Janet really laid out the blueprint.

The interludes were as interesting as the music. I felt it had little dynamic to it... you heard one song and you heard 'em all except for the lyrics (for the most part).

Definitely not as mature as most of Janet's other albums, but as far as what it is meant to be (a new jack swing/pop/dance album) it does pretty darn well. Almost every track here is strong and worth a listen. This is what most modern pop albums wish they could be like. Also does a good job at incorporating Janet's political and social ideas...I guess. Close to a 90/100 for me. Very enjoyable album.

This album is definitely one of Janet's best. It's one of those rare albums that is fantastic from start to finish. "Rhythm Nation 1814" was quite a contrast to her mega breakthrough album, "Control."

"Rhythm Nation 1814" would spawn a jaw dropping SEVEN top 5 hits on the Billboard Hot 100. A record which remains unbroken.

Janet Jackson turned into a star with her album "Control", but this was what rocketed her into mega-stardom.

I don't rate this album as highly as the album "Control" or "Janet" in fact "Velvet Rope" is also a better and more mature album. I don't find R.N. as soulful as her other albums it has a some good tracks on it especially the last 3 tracks which are ballads and Escapade but it hasn't stood the test of time.

Your feedback for Rhythm Nation 1814