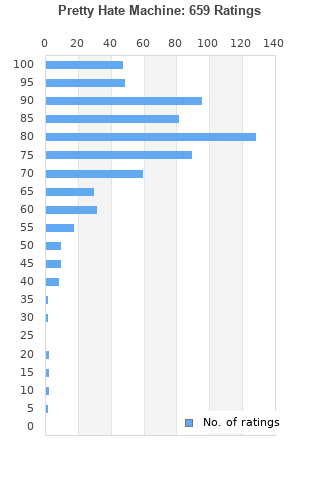 Pretty Hate Machine is ranked 2nd best out of 23 albums by Nine Inch Nails on BestEverAlbums.com.

The best album by Nine Inch Nails is The Downward Spiral which is ranked number 147 in the list of all-time albums with a total rank score of 11,517. 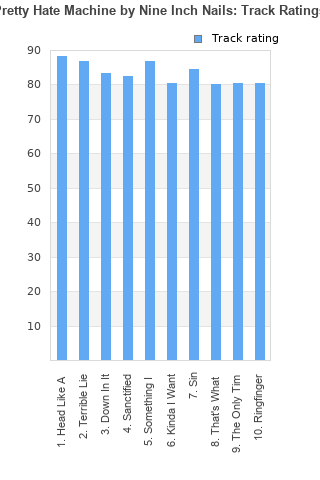 Something I Can Never Have
Rating: 87 (137 votes)Comments:

Rating metrics: Outliers can be removed when calculating a mean average to dampen the effects of ratings outside the normal distribution. This figure is provided as the trimmed mean. A high standard deviation can be legitimate, but can sometimes indicate 'gaming' is occurring. Consider a simplified example* of an item receiving ratings of 100, 50, & 0. The mean average rating would be 50. However, ratings of 55, 50 & 45 could also result in the same average. The second average might be more trusted because there is more consensus around a particular rating (a lower deviation).
(*In practice, some albums can have several thousand ratings)
This album is rated in the top 2% of all albums on BestEverAlbums.com. This album has a Bayesian average rating of 79.2/100, a mean average of 78.5/100, and a trimmed mean (excluding outliers) of 79.3/100. The standard deviation for this album is 14.9.

I've liked this album since its release. Very interesting.

I definitely seem to get more personal enjoyment out of this synth-pop sound than what comes in the albums thereafter.

A terrific and really hard to categorize debut.

Favorites: Head Like A Hole, Terrible Lie, Down In It, Something I Can Never Have, Sin.

Lyrics from angsty/edgy Trent are little corny, but I really liked synth-pop music and dancy beats.

One of my all time favorite albums. I'm biased in the sense that I went to a lot of warehouse clubs in Detroit around the time this came out and several of these tracks got a lot of play time. This and Ministry's A Land of Rape and Honey the year prior really put their stamp on industrial music for me

Nine Inch Nails was a direct result of the synth pop era of the 80s. They brought a sound that was lacking at that moment, inspired by the alternative route, they took the dark turn.

Pretty Hate Machine is Nine Inch Nail's first album, and it is awesome. Much dancier than any other NIN record, Pretty Hate Machine mixes synthpop with the industrial influences that would dominate the rest of his work. However, this album is not lacking in humanity, but incorporates it in the lyrics seamlessly with the industrial dance music beneath. "Head Like A Hole" is a classic, but the song that best showed Trent's potential is "Something I Could Never Have". An excellent album, and even though his subsequent releases wouldn't adapt this same sound, I think it's an incredible debut.

Your feedback for Pretty Hate Machine