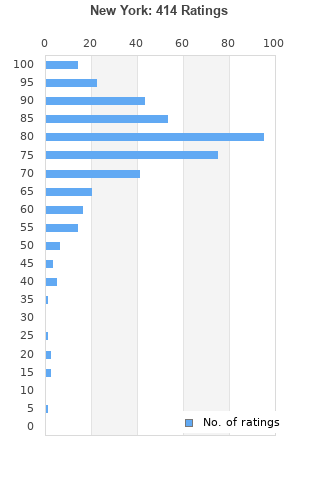 LOU REED - New York Superstar - UK Fame series issue of the 11-track Cassette
Condition: Like New
Time left: 12h 37m 50s
Ships to: Worldwide
£19.99
Go to store
Product prices and availability are accurate as of the date indicated and are subject to change. Any price and availability information displayed on the linked website at the time of purchase will apply to the purchase of this product.  See full search results on eBay

New York is ranked 3rd best out of 36 albums by Lou Reed on BestEverAlbums.com.

The best album by Lou Reed is Transformer which is ranked number 126 in the list of all-time albums with a total rank score of 13,879. 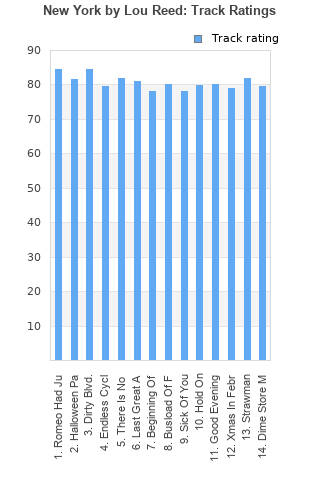 Rating metrics: Outliers can be removed when calculating a mean average to dampen the effects of ratings outside the normal distribution. This figure is provided as the trimmed mean. A high standard deviation can be legitimate, but can sometimes indicate 'gaming' is occurring. Consider a simplified example* of an item receiving ratings of 100, 50, & 0. The mean average rating would be 50. However, ratings of 55, 50 & 45 could also result in the same average. The second average might be more trusted because there is more consensus around a particular rating (a lower deviation).
(*In practice, some albums can have several thousand ratings)
This album is rated in the top 4% of all albums on BestEverAlbums.com. This album has a Bayesian average rating of 77.7/100, a mean average of 77.1/100, and a trimmed mean (excluding outliers) of 77.8/100. The standard deviation for this album is 13.5.

New York is Lou Reed’s return to form after pursuing new wave (yes, new wave) during the mid 80s. I do miss the production of Transformer and Berlin, but the songwriting is the real pull of his albums, and it’s great here.

I really like Lou Reed's style of lyrics and estetic, so this is a win for me. But overall this is really not anything especial.

A real masterpiece and my favourite album by Lou.

Yeah full of social commentary and often great lyrics - at his best when he's delivering a story and introducing interesting mis-fit characters. Stand out songs for me are the first three songs plus Last Great American Whale. However there are a couple of songs I don't like - There Is No Time and Good Evening Mr Waldheim, and I actively hate the jazzy Beginnings Of Great Adventure. But there is enough good stuff here to interest you and most of the tracks he delivers superbly with the New York drawl (even Good Evening Mr Waldheim is well delivered, just not too keen on it musically nor lyrically though)

Visit my blog for a review of this album

'Project music is my savior'

I simply love that album, I think it´s more than just good songs, it´s a way of looking at the world in an intelligent and passionate manner.

Your feedback for New York