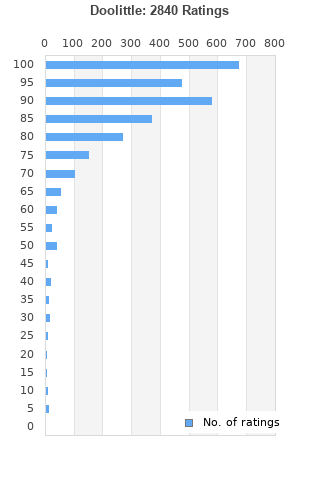 Doolittle is ranked as the best album by Pixies. 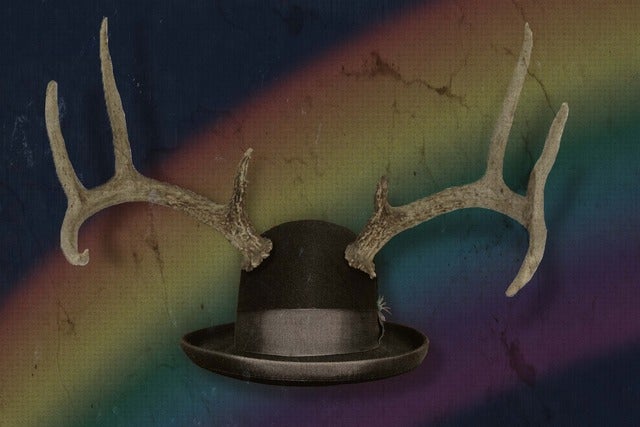 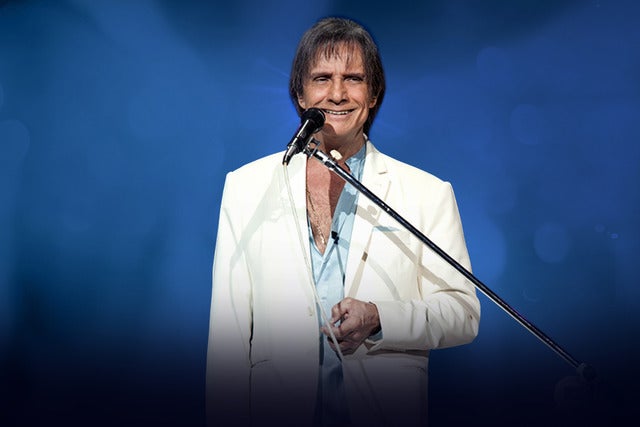 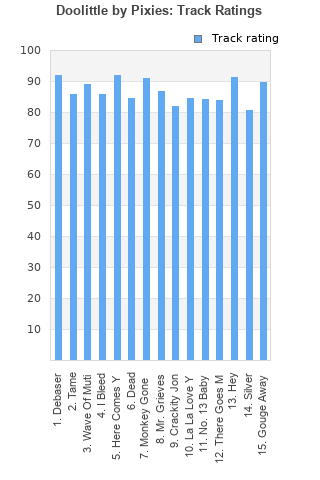 Rating metrics: Outliers can be removed when calculating a mean average to dampen the effects of ratings outside the normal distribution. This figure is provided as the trimmed mean. A high standard deviation can be legitimate, but can sometimes indicate 'gaming' is occurring. Consider a simplified example* of an item receiving ratings of 100, 50, & 0. The mean average rating would be 50. However, ratings of 55, 50 & 45 could also result in the same average. The second average might be more trusted because there is more consensus around a particular rating (a lower deviation).
(*In practice, some albums can have several thousand ratings)
This album is rated in the top 1% of all albums on BestEverAlbums.com. This album has a Bayesian average rating of 88.2/100, a mean average of 86.7/100, and a trimmed mean (excluding outliers) of 88.2/100. The standard deviation for this album is 15.0.

I've tried over and over to let this album sink in; however, I just don't get it. Way better music is out there from that time period.

One of my top 5 all time guitar indie albums. It is an absolute triumph of varying and wacky ideas coming together to make a surprisingly coherent and brilliant album that stands as one of the most influential albums of it's kind.

I think this album is a bit overrated to be honest. Here Comes Your Man, Debaser and Monkey Gone To Heaven are awesome. There are a few other good songs like Gouge Away and La La Love You, but too much of the album is annoying noise (eg. Crackity Jones). Still definitely worth a listen, but I struggle to see it as #1 album of the 80s and #17 of all time.

8 of the tracks (more than half) I would rate at 9/10 or higher. So yeah, we all know this is a great album. However - a few songs (Dead, Crackity Jones, and Silver) are "just OK" and actually border on being a little annoying. Compare to the "Bossanova" album, which does not swing as wildly. It only has 3 songs I rate over 9, but nothing I dislike or find annoying. So that album wins on consistency. Ah well, thanks to modern technology it's really easy to skip the tracks you don't like as much. That said, even the worst of this album is better than the best of some others.

A creative, destructive feast for the ears. How did human minds come up with these songs. One of the all time greats.

The Pixies are an anomaly. On one track they can slam you in the mouth with aggressive riffs and smashing rhythms. In the next, they can pull back with sublime melodies and poetic lyrics. And in the case of Doolittle, all of them weave together this beautiful and powerful piece of art. One of the best of all time.

Bought this on tape from the old Britannia Music Club service, after hearing several of the songs on Peel Sessions. Honestly....was disappointed when I first played it. Just didn't get it at all. Took me a good few years to appreciate. Now I just think it is one of the most defining records of the 1980's. This along with Surfer Rosa re-energized a damp decade for music in general. So original which always matters.

Your feedback for Doolittle