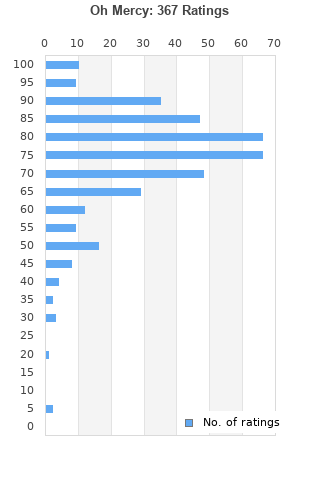 Oh Mercy is ranked 13th best out of 74 albums by Bob Dylan on BestEverAlbums.com.

The best album by Bob Dylan is Highway 61 Revisited which is ranked number 26 in the list of all-time albums with a total rank score of 35,893. 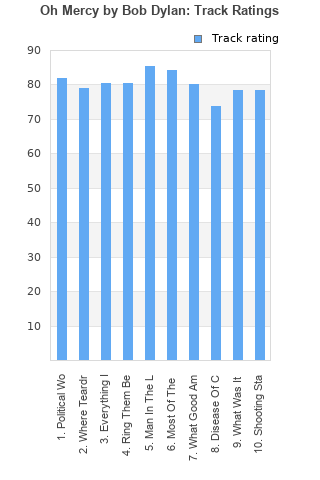 Rating metrics: Outliers can be removed when calculating a mean average to dampen the effects of ratings outside the normal distribution. This figure is provided as the trimmed mean. A high standard deviation can be legitimate, but can sometimes indicate 'gaming' is occurring. Consider a simplified example* of an item receiving ratings of 100, 50, & 0. The mean average rating would be 50. However, ratings of 55, 50 & 45 could also result in the same average. The second average might be more trusted because there is more consensus around a particular rating (a lower deviation).
(*In practice, some albums can have several thousand ratings)
This album is rated in the top 13% of all albums on BestEverAlbums.com. This album has a Bayesian average rating of 75.2/100, a mean average of 74.3/100, and a trimmed mean (excluding outliers) of 75.3/100. The standard deviation for this album is 14.5.

The 80s highlight from the man himself. From the pulsating Political World, through the beautiful Where Teardrops fall, Everything is Broken, Most of the Time and my favourite, What Good Am I?, this is a true classic of the period.

The first three are mediocre, and the last three are alright, but that middle stretch of four songs is spectacular. Something about Most Of The Time especially resonates with me so damn much.

Probably Dylan's best album of the 80's. My 5 favorite songs: Everything is Broken (Kenny Wayne Shepard does a great cover of this song); Political World; Ring Them Bells; Disease of Conceit; Man in the Long Black Coat.

Arguably his best album of the 1980s it flows together very well and has several good/great songs my favorites are Political World and Shooting Star.

Bob Dylan's return to form after the artistic and commercial disasters of knocked out loaded and down in the groove. The key to this success, aside from Dylan's songs, was Bono's urging to use Daniel Lanois as producer. It's a perfect marriage. Lanois' production brings an atmospheric soundscape to the album, much as what he did on U2's Joshua tree record. The opener, political world, sounds nothing like Dylan's done before. Best tracks are three songs that appear in the middle of the album. Ring them bells, the man in the long black coat, and my favourite, most of the time. Praise also to, what good am I?, and closing track, shooting star. This was Dylan's best album since, desire. Unfortunately, Bob would slip back into the drivel of the previous two albums with his next release, under the red sky, but as far as oh mercy is concerned, Dylan's best album of the 80's.

an underrated Bob Dylan album this one!!!
Beautiful moody ballads.

Hailed as this modern comeback... Certainly better than the other stuff from the 80s, but not quite on par with Time Out of Mind and what came after.

an underrated Bob Dylan album this one... you will find some hidden gems with close listening

Your feedback for Oh Mercy