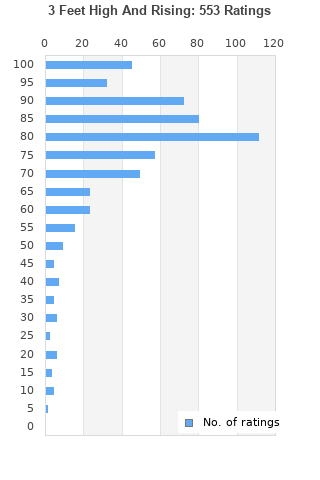 De La Soul - 3 Feet High and Rising (2001)
Condition: Very Good
Time left: 1d 8h 40m 5s
Ships to: Worldwide
£5.19
Go to store
Product prices and availability are accurate as of the date indicated and are subject to change. Any price and availability information displayed on the linked website at the time of purchase will apply to the purchase of this product.  See full search results on eBay

3 Feet High And Rising is ranked as the best album by De La Soul. 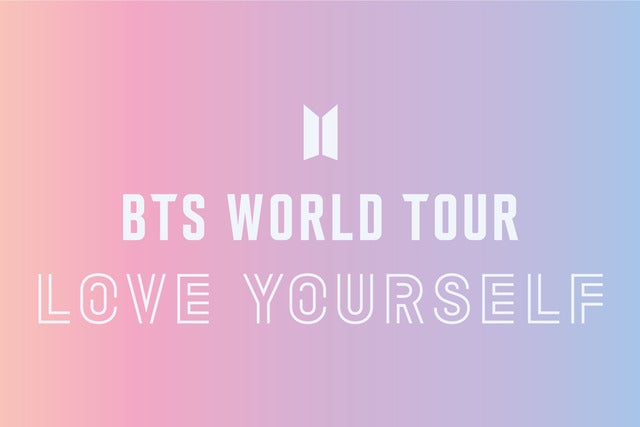 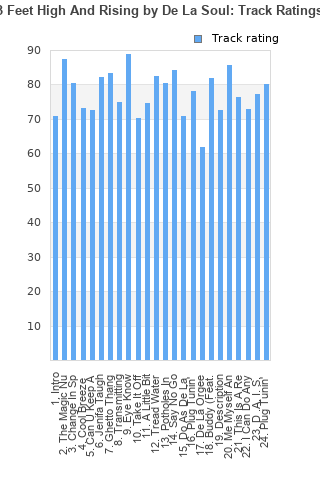 Rating metrics: Outliers can be removed when calculating a mean average to dampen the effects of ratings outside the normal distribution. This figure is provided as the trimmed mean. A high standard deviation can be legitimate, but can sometimes indicate 'gaming' is occurring. Consider a simplified example* of an item receiving ratings of 100, 50, & 0. The mean average rating would be 50. However, ratings of 55, 50 & 45 could also result in the same average. The second average might be more trusted because there is more consensus around a particular rating (a lower deviation).
(*In practice, some albums can have several thousand ratings)
This album is rated in the top 3% of all albums on BestEverAlbums.com. This album has a Bayesian average rating of 78.4/100, a mean average of 76.8/100, and a trimmed mean (excluding outliers) of 78.5/100. The standard deviation for this album is 18.2.

I think it can be difficult to remember how one dimensional rap music was before this album. It really was about guns and bitches and bling, until this multi coloured day-glow delight appeared, seemingly from nowhere; to my ears at least - I’d never heard anything like it.

The album’s gift is that suddenly people could rap about anything at all and it can still sound street...the easy going multi-cultural street that is Sesame.

And that’s not all. With the wide array of subjects came a wider variety of samples. More jazzy laid back beats came around too. Artists far away from the epicentre of rap were allowed to take liberties they wouldn’t have otherwise dreamed. Massive Attack, Beastie Boys, Cypress Hill, Fat Boy Slim, Dee-Lite.

Arguably the most influential album of the 80s.

This really captures what was fun about hip-hop in the late 80s.

Amazing hip hop record. On par with, if not better than, PE's It Takes A Nation..., Rakim's Paid In Full & NWA's Straight Out of Compton. If you enjoy A Tribe Called Quest then this is for you.

The culmination of the evolutionary arc of hip hop’s first decade. The fact that 30 years later it’s still sounds bold and revolutionary is a testament to the genius of De La Soul and 3 Feet High.

What a joy it was listening to this classic . I'm not a Hip Hop guy yet my 2 listens of this album were 100% enjoyable . Every music fan needs to hear this album

Interesting to read some hate in the comments in relation to the skits which really surprised me . The skits here aren't great I'll admit that but in comparison to the immature and purile skits on Eminems albums they are pure genius , and also remember this album is credited with being first to introduce skits into the Hip Hop album

What to say about this record that hasn't already been said...funny, quirky, brilliant, ahead of its time? I don't know - how about "classic"?

I just love the groove to this album...yeah the skit's aren't brilliant as individual things but in the context of the whole album don't spoil it. Not my normal style of music but edges out Run DMC's Raising Hell for me.

Even for me, this was a fun as hell hip-hop album. Had to buy it on vinyl after I heard it.

Stellar production from Prince Paul and lots of fun to listen to. Along with Paul's Boutique (Beastie Boys, Dust Brothers producing), this was a groundbreaking production showcase LP in 1989, just before/as the sample clearance crackdown began. Would be better if it was ten to fifteen minutes shorter - just a few weak tracks holding it back from being a perfect album.

Your feedback for 3 Feet High And Rising