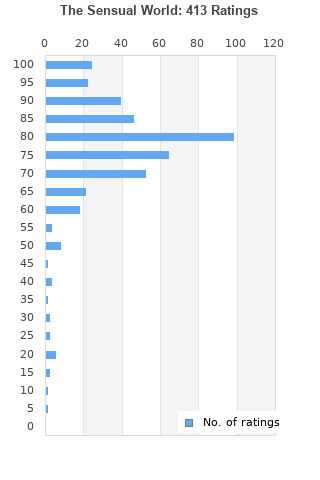 The Sensual World is ranked 5th best out of 16 albums by Kate Bush on BestEverAlbums.com.

The best album by Kate Bush is Hounds Of Love which is ranked number 71 in the list of all-time albums with a total rank score of 19,988. 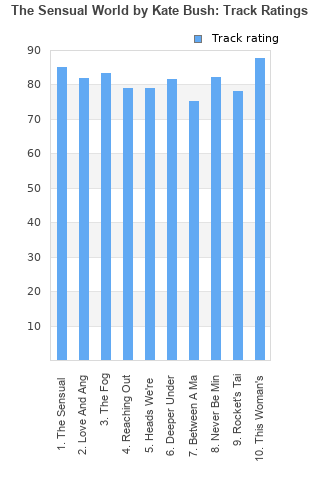 Rating metrics: Outliers can be removed when calculating a mean average to dampen the effects of ratings outside the normal distribution. This figure is provided as the trimmed mean. A high standard deviation can be legitimate, but can sometimes indicate 'gaming' is occurring. Consider a simplified example* of an item receiving ratings of 100, 50, & 0. The mean average rating would be 50. However, ratings of 55, 50 & 45 could also result in the same average. The second average might be more trusted because there is more consensus around a particular rating (a lower deviation).
(*In practice, some albums can have several thousand ratings)
This album is rated in the top 3% of all albums on BestEverAlbums.com. This album has a Bayesian average rating of 78.1/100, a mean average of 76.5/100, and a trimmed mean (excluding outliers) of 78.3/100. The standard deviation for this album is 15.8.

Kate is at her best when keeping her songs small and quiet, like the last song on this album. As soon she makes the songs loud and big, I'm out...hence only 80/100

Kate is at her best in the moodier and slower songs, when she applying heavier sounds the songs get overblown and big. Smaller and simpler is better like the last song on

This album is only slightly behind Hounds of Love, This woman's work and The Fog are my favourite tracks.

Just brilliant. Only Deeper Understanding sounds a bit dated. Other than that one small criticism, this is a perfect album. Kate's coming of age.

Favorite Tracks:Between A Man And A Woman, Never Be Mine

It's the sense of grown-up accomplishedness that really makes The Sensual World such a satisfying record. Bush's wild and brilliant experimentation is shaped and directed beautifully here into a more mature and classy record, compared to her previous work.

Less bold than her previous work in terms of not having any real big-hitters, save for the enigmatic track-of-the-same-title opener and the heartbreakingly beautiful ending, yet what it lacks in show it makes up for in detail. It pays dividends to spend time with The Sensual World, especially to pick out certain lines on songs such as the emotional rollercoaster of Love & Anger, the dystopian Deeper Understanding and on the soulful Never Be Mine.

This is Bush as a craftswoman; an artist at her peak not trying to outdo herself or indeed anyone, but just making wonderful, beautiful music as always. The difference now though is that Bush sounds and feels more mature here, revealing a delicate vulnerability in her words and in the tone of her music.

Personal, deep and, for lack of a better word, sensual.

A great and cohesive record filled to the brim with beautiful tracks. This particular album may not be as groundbreaking as its direct predecessor "Hounds of Love", but similarly to Bush's "The Dreaming", it does that remarkable thing of creating its own little world whilst teleporting you straight there.

There's no escaping the eccentricity or the beauty of Kate Bush's work, and this is a wonderful album that slides right in with her other finest pieces of art.

Lovely Kate Bush record. The sensual world completes a run of four brilliant albums. Some great songs and sounds here. Love and anger, heads we dance, and, this woman's work, are all excellent. The sensual world, is an atmospheric record, but has the songs to back it up.

I fall more in love with her albums at every listen, and The Sensual World is no exception.

The Fog is quite possibly my favorite, at least at the moment. Kate has not always been someone I was ready to listen to, but I'm so glad I'm ready now.

If 1985's Hounds Of Love saw Bush channel her adolescent high spirits for the last time, The Sensual World served as a coming of age. Having turned 30, she delivered her most rounded mature album to date. She acknowledged her irish heritage, taking inspiration both from the Celtic instrumentation, and, at least in the case of the title track, from James Joyce's most sensual of characters, Molly Bloom. There is a broader folk influence too, which is partly down to Bush's brother Paddy, a fan of ethnic music. It is he who introduced her to The Trio Bulgarka, traditional Bulgarian singers who appear throughout the album. Michael Nyman arranges strings on "Reaching Out"; Nigel Kennedy appears on "The Fog" and "Heads We're Dancing"; Dave Gilmour plays on "Love And Anger" and "Rocket's Tail". Even her father, credited as Dr. Bush, contributes spoken word dialog to "The Fog", a song nominally about a parent teaching their child to swim -symbolism that is not hard to decipher. (An aditional track, "Walk Straight Down The Middle", featured on the cd).
Although champions of her teenage spectral keening might have wished she had remained forever young, Kate breaks new ground, welcoming an era where global influences are paired with computerized proficiency. There is a distinct quality of womanly sexuality to The Sensual World too, as well as an attempt to address outside of her Kentish back yard. Whereas once she sounded as if she was happiest playing organ in the barn behind her parents' house, here she sings as a fully accomplished recording artist ready for international success.

"Growing up for most people is just trying to stop escaping... But I'm not sure if people ever grow up properly."

Your feedback for The Sensual World