The Real Thing (studio album) by Faith No More 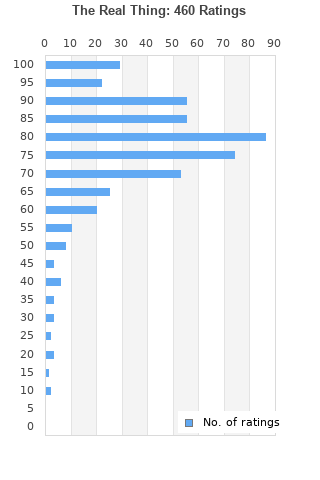 The Real Thing is ranked 2nd best out of 11 albums by Faith No More on BestEverAlbums.com.

The best album by Faith No More is Angel Dust which is ranked number 548 in the list of all-time albums with a total rank score of 3,405.

An acoustic evening with Mark Burgess of The Chameleons, The True Faith, and Kelly Spyglas
Sonia, Cambridge, United States. 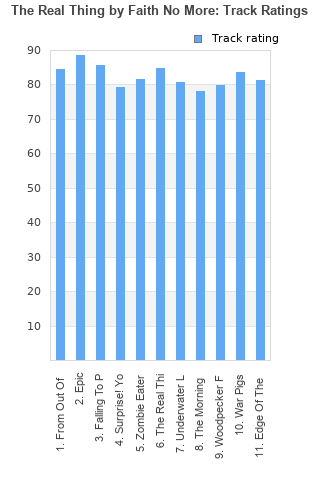 Rating metrics: Outliers can be removed when calculating a mean average to dampen the effects of ratings outside the normal distribution. This figure is provided as the trimmed mean. A high standard deviation can be legitimate, but can sometimes indicate 'gaming' is occurring. Consider a simplified example* of an item receiving ratings of 100, 50, & 0. The mean average rating would be 50. However, ratings of 55, 50 & 45 could also result in the same average. The second average might be more trusted because there is more consensus around a particular rating (a lower deviation).
(*In practice, some albums can have several thousand ratings)
This album is rated in the top 3% of all albums on BestEverAlbums.com. This album has a Bayesian average rating of 77.9/100, a mean average of 76.8/100, and a trimmed mean (excluding outliers) of 78.0/100. The standard deviation for this album is 15.5.

Favorites: Epic; Falling To Pieces; The Real Thing; The Morning After; Woodpecker From Mars.

This album should easily be in the top 100. Each song brings something to the table.

I loved the singles at the time and had a picture disc of From Out of Nowhere which I sold to the school metalhead. I also had that live album they had but never got around to getting this, even though after seeing them destroy GnR on the illusions tour, I should have been straight to the record shop. However by then, this stuff was mostly not my thing. Listening now it's good fun. Good enough for my 80s chart and the highs are the best of the tail end of the decade, even if they weren't too cool next to what was going on at the time. Reading RYM comments, someone said Patton sounds like Mansun's Draper, he does! Ever since I first heard Mansun, I always couldn't put my finger on who he sounded like ha.

Came onto the scene and was interesting enough without bringing anything mind-blowing (or epic) with it. Is undoubtedly a very good album but that's about it.

One of the most creative, interesting and ambitious rock albums of the entire decade, this basically sticks a middle finger up at the conventions of both glossy glam rock and mopey indie college bands that were popular at the time. It doesn't really fit in with the metal genre either, nor the grunge sound popular a few years later. This is its own beast doing its own thing; incorporating piano and synth and finding unusual sounds to weave into each song with just the right amount of restraint.

This is so much fun to listen to that I'm not even mad at it for influencing the (mostly) garbage nu metal movement that hit about a decade later. And if titles like "Zombie Eaters" and "Woodpecker from Mars" don't automatically pique your interest then sorry, we can't be friends.

How the hell is The Real Thing not the best rated song on the album? Probably their best song all around. And a fantastic album, nearly as good as Angel Dust

Your feedback for The Real Thing