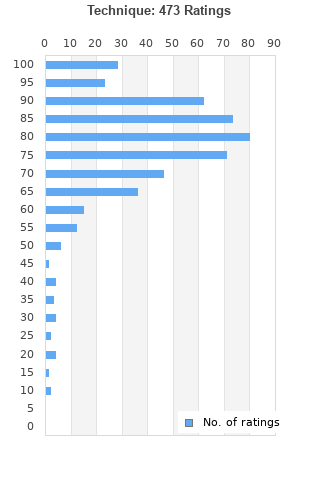 Technique is ranked 4th best out of 29 albums by New Order on BestEverAlbums.com.

The best album by New Order is Power, Corruption & Lies which is ranked number 261 in the list of all-time albums with a total rank score of 7,308. 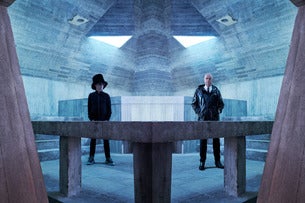 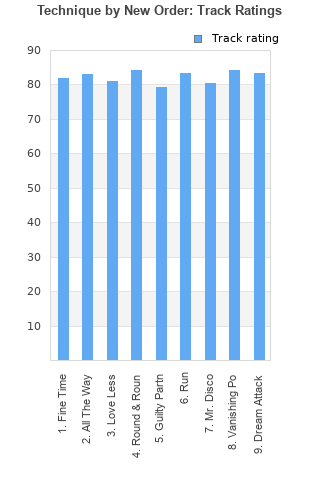 Rating metrics: Outliers can be removed when calculating a mean average to dampen the effects of ratings outside the normal distribution. This figure is provided as the trimmed mean. A high standard deviation can be legitimate, but can sometimes indicate 'gaming' is occurring. Consider a simplified example* of an item receiving ratings of 100, 50, & 0. The mean average rating would be 50. However, ratings of 55, 50 & 45 could also result in the same average. The second average might be more trusted because there is more consensus around a particular rating (a lower deviation).
(*In practice, some albums can have several thousand ratings)
This album is rated in the top 2% of all albums on BestEverAlbums.com. This album has a Bayesian average rating of 78.6/100, a mean average of 77.1/100, and a trimmed mean (excluding outliers) of 78.8/100. The standard deviation for this album is 15.7.

Another New Order album, another excellent collection of catchy songs and their excellent, unique production. I love slight acid techno influences that are bubbling under the surface. Wonderful stuff

My favorite New Order studio album. While there are no individual tracks that come close to matching their singles, every song on this album nonetheless is at the least quality, and more importantly, they all contribute to building the mood of the album, which is really its strongest point. Inspired by the Ibiza scene, acid house, and the ecstasy craze in clubs, this is a very druggy album that moves effortlessly between synth-dominated and three-piece guitar/bass/drums format songs.

While the songs are danceable, personally my preferred atmosphere for listening to this album is parked somewhere just looking at the stars. Dream Attack is a standout on Technique, and is an excellent closer, continuing the comedown from the first half of Vanishing Point (another standout). However, it will have the most power when heard in its proper place in the track list. As such, I must recommend this album as a whole for anyone looking to get the most out of it. In the right state of mind, I think it will be worth it.

Woah, this is actually fucking great dance music. Not something I had expected from a new wave band.

I remember when this came out. I was 16, in a school trip in Italy, and my roomate made me listen to this in his yellow Sony sport: a dance 80's sound that had just came out of fashion in 89, and a very weak singer, sometimes off key. I thought waouh, that's so snob, ironic, and yet great in a way!

An accessible New Order album. It's one of their strongest but hampered slightly by Sumner's weak vocals. Apart from that it's a fine marker to where New Order were at, at this time.

One of their best albums! The combination of the the acid house and dance music in Ibiza with the signature New Order sound equals something magical. Favorites are well, the whole album! Probably the most cohesive album from them

New Order is still my favorite band from this era, and this album ends a wonderful streak of quality, creative, alternative 80s music. At the time I might have said this was my favorite album by New Order, but as time has gone on I find that I care less for the polished synth sounds of this album and prefer best the rougher, more creative sounds of Low Life and Brotherhood (my favorite two New Order Albums). In particular, the first track of this album at the time it came out captivated me; now I just skip that track and listen to the rest of the album. Still a great album, but if you're looking to explore New Order, I would start with Power, Corruption and Lies, or Low Life. Personally, I would now consider Low Life the most classic of all their albums.

Your feedback for Technique