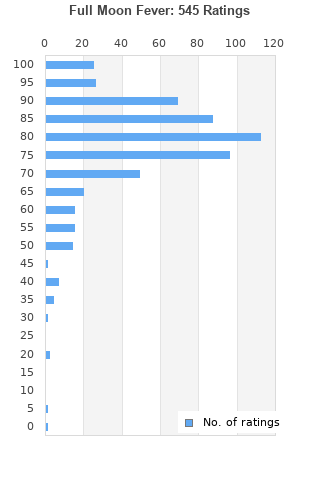 TOM PETTY " FULL MOON FEVER " ..CD ALBUM EX!
Condition: Very Good
Time left: 7h 30m 24s
Ships to: Worldwide
£3.99
Go to store
Product prices and availability are accurate as of the date indicated and are subject to change. Any price and availability information displayed on the linked website at the time of purchase will apply to the purchase of this product.  See full search results on eBay

Full Moon Fever is ranked as the best album by Tom Petty. 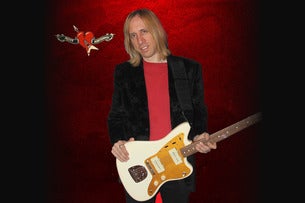 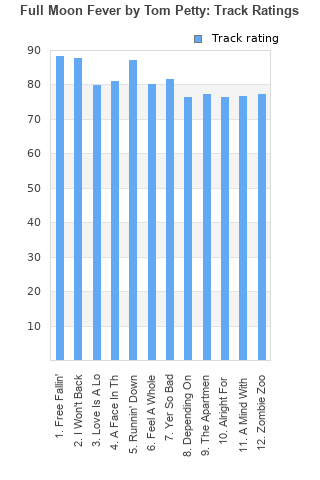 Rating metrics: Outliers can be removed when calculating a mean average to dampen the effects of ratings outside the normal distribution. This figure is provided as the trimmed mean. A high standard deviation can be legitimate, but can sometimes indicate 'gaming' is occurring. Consider a simplified example* of an item receiving ratings of 100, 50, & 0. The mean average rating would be 50. However, ratings of 55, 50 & 45 could also result in the same average. The second average might be more trusted because there is more consensus around a particular rating (a lower deviation).
(*In practice, some albums can have several thousand ratings)
This album is rated in the top 3% of all albums on BestEverAlbums.com. This album has a mean average rating of 77.0/100. The trimmed mean (excluding outliers) is 78.1/100. The standard deviation for this album is 13.9.

This is the hidden Travelling Wilburys Vol 2, no need to say that it is as amazing as the other albums. My favourite from Tom Petty.

this is number two on my list of 1989 this is tom petty in all of his glory best Tom Petty album second only to Damn the Torpedoes almost every track is fantastic the Byrds cover is spot on The Apartment Song speaks to any single person in their 20s Wont back down, free fallin, and on and on

One of Petty's best works. I understand why he released it as a solo album because it has a bit more variety than his Heartbreakers music. Even though a lot of the members of the band were involved in the making of this one.

Key tracks: Free Fallin', I Won't Back Down, Love is a Long Road, Running Down a Dream, The Apartment Song

A fantastic album overall. I don't think there's a bad track in the bunch.

A top album. Not heard this album for over 30 years and just got it again. Sooooo many great tracks - Free Fallin is such an excellent track.

This would be a top 100 album for me if the 2nd half was as good as the 1st. Does fall away rather but overall still a very good album.

Top album ,Won't Back Down, Free Fallin', Running Down a Dream, are the best here some other gems also although last few tracks not as good.

The first half is superb witht Free Fallin', I Won't Back Down and Runnin' Down a Dream, but the second half is just dull

Petty's best work. Lots of radio classics here, but pretty much everything on the album is great.

Your feedback for Full Moon Fever