Bleach (studio album) by Nirvana (US) 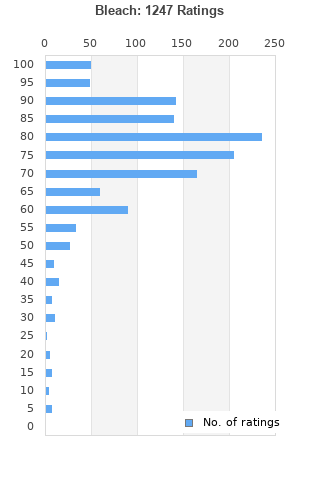 Bleach is ranked 4th best out of 17 albums by Nirvana (US) on BestEverAlbums.com.

The best album by Nirvana (US) is Nevermind which is ranked number 15 in the list of all-time albums with a total rank score of 47,606. 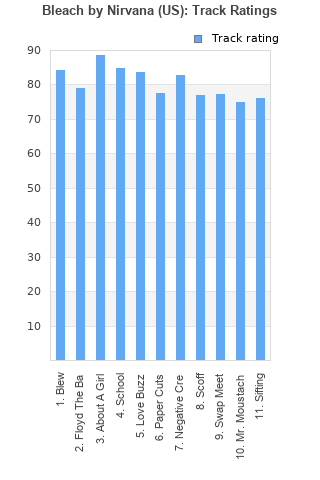 Rating metrics: Outliers can be removed when calculating a mean average to dampen the effects of ratings outside the normal distribution. This figure is provided as the trimmed mean. A high standard deviation can be legitimate, but can sometimes indicate 'gaming' is occurring. Consider a simplified example* of an item receiving ratings of 100, 50, & 0. The mean average rating would be 50. However, ratings of 55, 50 & 45 could also result in the same average. The second average might be more trusted because there is more consensus around a particular rating (a lower deviation).
(*In practice, some albums can have several thousand ratings)
This album is rated in the top 8% of all albums on BestEverAlbums.com. This album has a Bayesian average rating of 76.0/100, a mean average of 74.9/100, and a trimmed mean (excluding outliers) of 76.0/100. The standard deviation for this album is 15.6.

Really poor album overall. About A Girl is an incredible song, and drags the rating of this album up considerably - a glimpse of the greatness to come. Love Buzz is okay, but the rest is just incoherent noise.

‘Bleach’ is one of those albums that is historically important without actually being particularly good and clearly suffers from personnel issues (Dave Grohl wouldn’t join Nirvana for another year and Jason Evermore, Soundgarden, wouldn’t play a note despite being credited on the sleeve)

There’s four really solid tracks here in “Blew” / “About a Girl” / the Shocking Blue cover “Love Buzz” and of course “Negative Creep”, the remaining 9 tracks, with the exceptions “Floyd the Barber” & “School” are largely forgettable. Cobain famously declared he was still writing lyrics for ‘Bleach’ on his way to the studio and it kinda shows

I could understand someone saying they prefer this album to Nirvana’s next release, but to say its better is simply wrong

Nirvana’s opening effort shows their embryonic brilliance in punk form. The songs are – for the most part – short and punchy, delivering their message with energy and abandon and then closing abruptly. The songwriting may not quite be up to their future standards but there’s no denying the impact of this album.
Best Track: About A Girl

Their sound is already there, they just didn't have enough for an album. After the first five tracks, which are great, there is a significant drop.

Negative, bleak, angst ridden lyrics tackling subject matter that was tormenting his (Kurdt's) mind. Written with great feeling but so sparse and lacking in depth to be almost childlike leading to myriad interpretations. It's not just a grunge album it is clearly influenced by many styles. Styles ranging from extremely energetic heavy metal, punk, slow heavy rock and early Beatlesque pop. As previously stated the first 5 tracks are standout and then the album gradually deteriorates leaving an unsatisfied/unfullfilled feeling. Could have been better but still a very good first attempt. I don't suppose Kurdt's school reports would have been that generous.

A good album for sure. Really good. But it barely touches what was to come. Overrated here I feel on the basis of later work.

This album really showed that Nirvana was an act to be reckoned with, they were evolving the sound of music even on this record, even though this may be their weakest record it's a great start to a perfect discography

Your feedback for Bleach