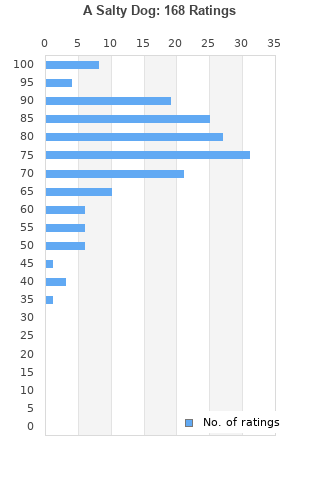 A Salty Dog, Procol Harum, New, Vinyl
Condition: New
Time left: 19h 10m 6s
Ships to: Worldwide
$30.66
Go to store
Product prices and availability are accurate as of the date indicated and are subject to change. Any price and availability information displayed on the linked website at the time of purchase will apply to the purchase of this product.  See full search results on eBay

A Salty Dog is ranked as the best album by Procol Harum. 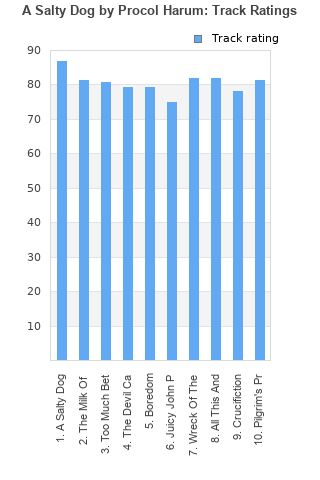 Rating metrics: Outliers can be removed when calculating a mean average to dampen the effects of ratings outside the normal distribution. This figure is provided as the trimmed mean. A high standard deviation can be legitimate, but can sometimes indicate 'gaming' is occurring. Consider a simplified example* of an item receiving ratings of 100, 50, & 0. The mean average rating would be 50. However, ratings of 55, 50 & 45 could also result in the same average. The second average might be more trusted because there is more consensus around a particular rating (a lower deviation).
(*In practice, some albums can have several thousand ratings)
This album is rated in the top 4% of all albums on BestEverAlbums.com. This album has a Bayesian average rating of 77.4/100, a mean average of 77.4/100, and a trimmed mean (excluding outliers) of 77.7/100. The standard deviation for this album is 12.7.

What a quirky and delightful album!

Genius work, the kind of music will last forever.

Along with, shine on brightly, the best Procul Harum record. Beautifully imaginative and inventive. Underrated.

A Salty Dog was the last Procol Harum album to feature the original 5-piece line-up. Compared to the previous two, which were very much dominated by Gary Booker's songs and vocals ( not a negative thing at all ), more space is given to guitarist Robin Trower and organist Matthew Fisher.

Robin Trower debuts as leadsinger on his own "Crucifiction Lane" and he wrote "Juicy John Pink" - both songs show the roots of Procol Harum as a tight r&b band. Trower also co-wrote the acoustic "Too Much Between Us" with Brooker - beautifully sung by Brooker, by the way.

Matthew Fisher produced the album, and arranged the orchestra for three of the songs - most note-worthy the title track, which is one of the greatest songs ever written and recorded. Compared to Brooker's Fisher's voice may appear somewhat thin, but he sings his two songs "Wreck of the Hesperus" and "Pilgrim's Progress" beautifully, and both songs fit in nicely on the album. "Pilgrim's Progress" bears big resemblance to the classic "A Whiter Shade of Pale". The charming "Boredom" with its Carribean rhythms is a Brooker/Fisher collaboration, adding to the great variety in styles which characterize the album.

Apart from the unique "A Salty Dog", the album features another Brooker classic "All This and More" - classic Procol Harum sound. Inspiration from the Band's recently released "Music From Big Pink", shines through on "The Milk of Human Kindness". The Band was a big inspiration for Procol Harum. "The Devil Came From Kansas" is one of the few tracks I often consider skipping over - too heavy and noisy; seems somewhat out of place on the album. Much better is the B-side "Long Gone Geek"; another heavy thing, which sounds inspired by The Small Faces or Humble Pie.

Among the bonus-track you may find there are four rare live-tracks from a 1969 April tour in the States. Great to hear the original band live - again their r&b roots shine through.

With this album you could say that the band scored a natural hat trick; having their debut and "Shine on Brightly" in mind.

Your feedback for A Salty Dog