Lightnin' And The Blues (studio album) by Lightnin' Hopkins 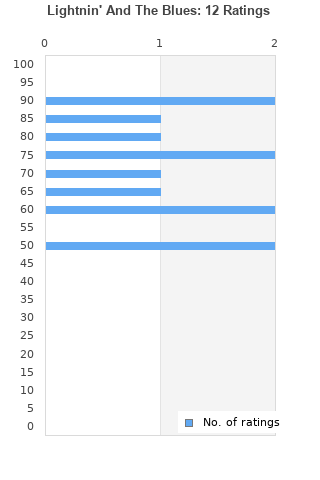 Lightnin' And The Blues is ranked 13th best out of 33 albums by Lightnin' Hopkins on BestEverAlbums.com. 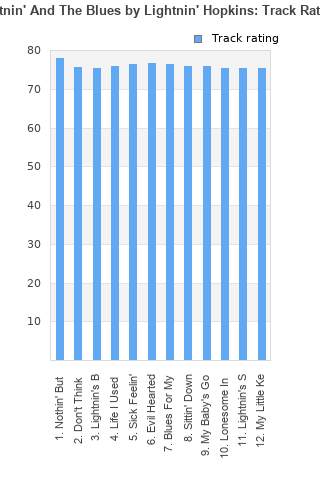 Lightnin' And The Blues rankings

Lightnin' And The Blues collection

Lightnin' And The Blues ratings

Rating metrics: Outliers can be removed when calculating a mean average to dampen the effects of ratings outside the normal distribution. This figure is provided as the trimmed mean. A high standard deviation can be legitimate, but can sometimes indicate 'gaming' is occurring. Consider a simplified example* of an item receiving ratings of 100, 50, & 0. The mean average rating would be 50. However, ratings of 55, 50 & 45 could also result in the same average. The second average might be more trusted because there is more consensus around a particular rating (a lower deviation).
(*In practice, some albums can have several thousand ratings)
This album has a Bayesian average rating of 71.8/100, a mean average of 70.8/100, and a trimmed mean (excluding outliers) of 70.8/100. The standard deviation for this album is 13.5.

Lightnin' And The Blues favourites

Lightnin' And The Blues comments

Ahh...
The legend of Lightnin' Hopkins...from humble beginnings in Centerville, Texas to meeting Blind Lemon Jefferson at the age of 8... to a lifetime of music before his death in 1982 from esophageal cancer. Simply a legend. A series of sides recorded in 1954 for Herald Records in Houston and released as 7 inch singles, this album was compiled and released in 1960 (despite its 1955 listing here). "Lightnin' and the Blues" is a great album full of soul, great songs, and lively acoustic blues guitar.

Your feedback for Lightnin' And The Blues