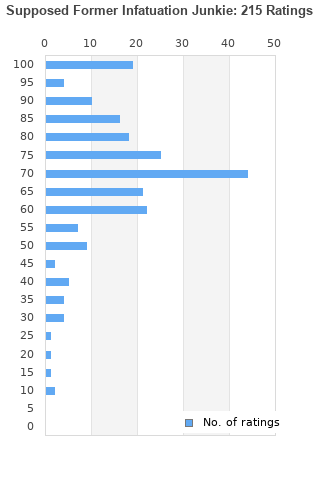 Supposed Former Infatuation Junkie is ranked 2nd best out of 16 albums by Alanis Morissette on BestEverAlbums.com.

The best album by Alanis Morissette is Jagged Little Pill which is ranked number 356 in the list of all-time albums with a total rank score of 5,358. 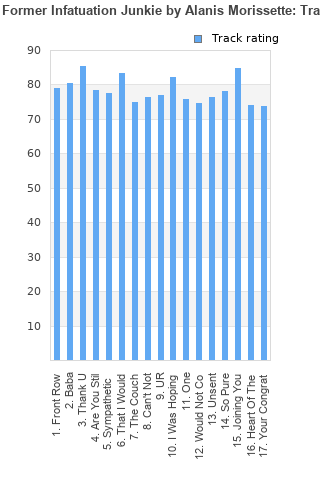 Rating metrics: Outliers can be removed when calculating a mean average to dampen the effects of ratings outside the normal distribution. This figure is provided as the trimmed mean. A high standard deviation can be legitimate, but can sometimes indicate 'gaming' is occurring. Consider a simplified example* of an item receiving ratings of 100, 50, & 0. The mean average rating would be 50. However, ratings of 55, 50 & 45 could also result in the same average. The second average might be more trusted because there is more consensus around a particular rating (a lower deviation).
(*In practice, some albums can have several thousand ratings)
This album has a Bayesian average rating of 71.2/100, a mean average of 70.5/100, and a trimmed mean (excluding outliers) of 71.1/100. The standard deviation for this album is 17.6.

The best album of Alanis

I like Thank U and some of the other tracks are OK, but the overall impression I get from this album is dreary. OK maybe some of these tracks may grow on me on repeated listens, but how many? I have played this album quite a few times now, do I continue to re-play this album in the hope that some tracks will eventually 'click' with me, or should I give up and listen to music I already like? It has been said that repeatedly listening to music you don't like until you eventually do is a form of brainwashing. If I do get to like more of these tracks and start playing them more my wife will walk in and tell me to 'turn that rubbish off'. Headphones then, why bother.

A good album that could have been a great album with a shorter runtime.

A brilliant album almost like a book that you don't mind reading over & over again. This is not as immediate as J.L.P. you do have to listen to it numerous times as different tracks grow on you at different rates. The only criticism is that it could be a couple of tracks shorter maybe drop The Couch and the last track. Overall though it is an amazing journey of an album.

I won't necessarily put this or Jagged Little Pill above one another. I like them both for different reasons. But, with this being said, I really do think that they are two different beasts. While Jagged Little Pill was a really great album that especially emphasized and brought to life the teenager angst that we have all felt before, it was just this. The songs had their meaning and their instrumentation and their production and their overall display on the album. You got it on your first listen, if you were paying attention.
Supposed Former Infatuation Junkie is quite different. You find layered, upon layered instrumentation and even vocals on a lot of tracks here. You will find more and more on each listen of this album. It is experimental, especially in comparison to Jagged Little Pill. I like each of these albums for their own reason, but you might find me listening to Jagged Little Pill out of comfort, and this one out of curiosity, wonder, excitement, and... well you get my point.

Morisette delivers a completely different experience to Jagged Little Pill here. This is a very haunting record, with lots of interesting instrumentation. Whilst this was never going to achieve the same kind of success, in terms of quality this is very nearly just as good

When I used to listen to this album I would skip a bunch of the songs, and now it's my favorite album and I love every track (and with 17 of them that says something). The reason for the big change is because I first came to the album with the wrong expectations - and I think this explains the divided reception. There aren't as many catchy hooks here or sing-a-long classics as there were on her album before this, so it can throw you off if that's what you're after. But if you're type who particularly enjoys songs with depth, with layers in production and lyrics that continue to offer more with every listen, you will like this. If you appreciate songs that push boundaries and subvert conventions in songwriting, you will like this. Not because it's the most experimental album ever produced, because it's not. But it is unusual and dense enough that it will put you off if you only expect the radio-friendly rock of Jagged Little Pill.
Moral of the story: come to the album with the right expectations, and you will hopefully appreciate this as a brilliant alternative album from a confessional singer-songwriter.

I was disappointed, but maybe I should give it more of a chance and in time probably will understand why everyone is raving about it.

My favourite album from her. For the 3 years preceding this album she was possibly THE biggest act in the music industry, anywhere in the world. With that in mind this has got to be one of the bravest albums from any artist, really unique and subversive. Many of the songs don't even have choruses, and the album as a whole is not particularly accessible. She alienated a lot of fans who liked the radio friendly winning formula she had struck upon with Jagged Little Pill, but she didn't need any more money, and was more than happy to forego the pressure of fame that she had experienced the years prior - so she resolved to just to the music she wanted, regardless of expectations. The result is an alt-rock masterpiece, that was overlooked by many who would normally appreciate it because many alt-rock fans had already written her off as too mainstream after Jagged Little Pill. Retrospectively though, this is an underrated 90s classic.